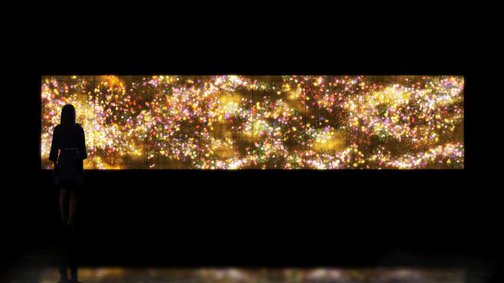 teamLab (f. 2001, Tokyo, Japan) is a co-operative, interdisciplinary group of professionals, headed by Toshiyuki Inoko, who refer to themselves ‘Ultra-technologists’:

The group is interested in various practices relevant in the information age and consists of artists, editors, programmers, engineers, mathematicians, architects, web and print graphic designers, and CG animators. Their purpose is to create a balance between technology, art, commerce and creativity and they do this by encompassing animation, sound, performance, internet, fashion, design, and medical science in their works.

‘Flowers and People - Gold’ was inspired by a visit to Kunisaki Peninsula in the spring, a time when cherry blossoms and rape blossoms were in abundance around the mountains. Seeing this scenery led to questions for the group about human intervention in the ecosystem; what do humans plant and what is propagated by nature?

The animated installation work shows flowers that gradually bud, blossom, grow and appear from all areas of the screen. Once a viewer steps close, (and is detected by sensors) the flowers start to wither away and die. A cycle endlessly continues, revolving around the coming to life and then the gradual decay that eventually leads to death. The interaction between the viewer and the installation fuels the work, continually changing the animated states that cannot be replicated. It is the viewer’s presence that prompts the cycle the flowers will take.

The elapsing of time that ‘Flowers and People – Gold’ conveys is one where the viewer as human body is implicated in the play of time. Through movement, they trigger the decay of the flowers that appear before them on the screen.

The work is reminiscent of traditional Japanese screens, such as the Gallery's 17th century Rinpa school work 'Flowers of the four seasons'. Not only is ‘Flowers and People’ presented on vertically hung digital screens but its complex animations, which are layered upon a gold background, is evocative of gold leaf backdrop on the painted screens.