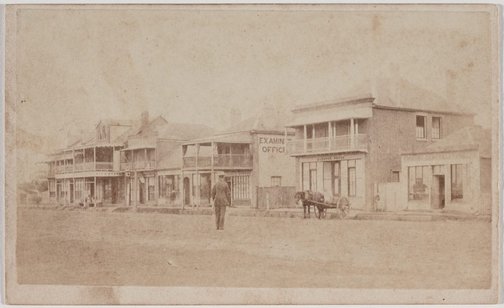 The American and Australasian Photographic Company (A & A Photographic Company) was established by Beaufoy Merlin in Melbourne. With his assistant Charles Bayliss, Merlin commenced an ambitious project to photograph every house and building in Victoria and New South Wales. The aim of this venture was to create an image library of the colonies so that properties could be viewed for investment or insurance purposes. The objective, as presented in the ‘Sydney Morning Herald’ 21 September 1870, was to promote ‘a novel means of social and commercial intercourse’.

An encounter with entrepreneur B O Holtermann in the Gold Rush town of Hill End in 1872 resulted in another remarkable project: an International Travelling Exposition containing photographs, raw materials, zoological specimens, amongst others. The centrepiece was to be a mammoth panorama of Sydney necessitating the production of wet plate negatives of 97 x 160 cm, the largest in existence.

Merlin retired as NSW manager of A & A Photographic Company in 1872 and died a year later. By then, there were A & A offices in Sydney, Melbourne, Hill End and Gulgong, though not, as the cartes de visite claimed, in San Francisco or New York.