Stephen Hawking and the illusion of size 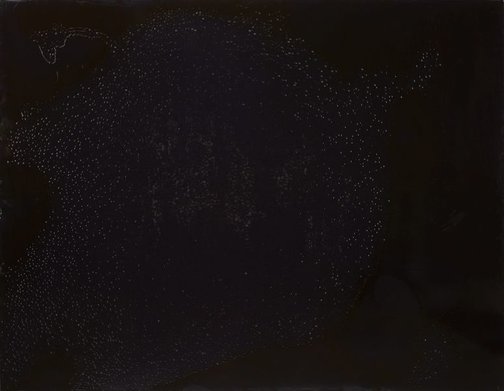 The series of monochrome paintings over which Frank splashes and pours varnish in varying degrees of thickness and viscosity have formed a significant strand of his practice in the 1990s. The formal character of the monochrome and its suggestion of the early twentieth century avant-garde and its various later incarnations is tempered by the thick layer of reflective varnish. Rather than sealing the surface and protecting the paint, the resin remains an active element of the work after it leaves the studio. Continuing to run and change as it slowly solidifies, it draws attention to the material nature of the painting.

Frank's titles add a further element to the engagement with his works. These paintings are entitled after the famous cosmologist Stephen Hawking. Hawking is renowned for his work on Einstein's General Theory of Relativity and the implication that space and time would have begun in the Big Bang and end in black holes. Hawking's writings on vast time and distances are also perhaps referred to in 'Stephen Hawking and the problem of size', as well as suggesting a slightly acerbic reference to Hawkings own diminutive height. While Frank's paintings are blue black in colour and one has a starry constellation of nodes in the varnish, too close an analogy should not be drawn. Frank himself has used quantum physics terms in describing his work as when he said "My work is not isolated to illusionistic practice or to material approach. It has always traversed all realities - creating if you like, a worm-hole across materials, approaches and possible meanings and content." (interview with Sue Cramer, Dale Frank: Ecstasy, MCA catalogue).

Dale Frank
Stephen Hawking and the illusion of size