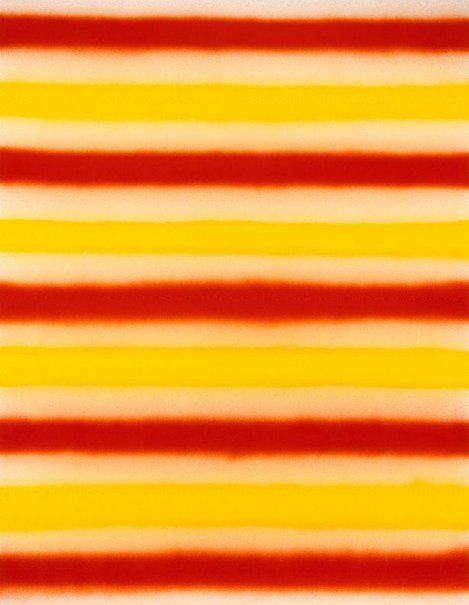 By avoiding references unique to a specific moment, place or culture, the abstract art produced by early 20th-century pioneers such as Kasimir Malevich or Piet Mondrian aimed to create a language that was timeless. While their idealism and utopian ambitions were ultimately not realised, they developed a sophisticated visual grammar that could communicate using only colour, shape, size and texture, without resorting to the conventions of figurative realism and literary narrative or allusion.

ADS Donaldson’s ‘Untitled’ fits comfortably into the history of art alongside the work of post World War II abstractionists Mark Rothko, Bridget Riley, Kenneth Noland and the hard edge school of the 60s in its use of regular bands of colour. But in painting at the end of the 20th century, Donaldson unavoidably works from a post-conceptual position, using humour and the vocabulary of abstraction without necessarily sharing the ideals or ambitions of his historical predecessors.

‘Untitled’ is one of a series of striped paintings in primary colours applied with a spray can. The historical precedent for using sprayed paint in fine art goes back to Man Ray’s use of an airbrush in 1917, but when Donaldson painted ‘Untitled’ in 2001 the association was more with youth culture and graffiti art than with art history. The essence of the work derives from the simple pleasures: the thrill of putting one colour next to another and seeing what happens, rejoicing in the vibration of colours and the mischief of creating a witty, decorative take on abstraction, one of the sacred cows of modern art.

Donaldson paints on unprimed fabric to emphasise flatness, as did American artists Kenneth Noland and Morris Louis, producing a similar bleeding of paint into the weave at the edges and a similar decorative appeal. Likewise the forms in his painting are derived from the application of paint (pouring in Louis’ case or via the quick swipe of an aerosol can in Donaldson’s) to explore the means and possibilities of painting itself. The bleeding of paint and the fuzzy edges of overspray deny the strict borders of each stripe and create a sensation of movement or even of luminescence that is very contemporary. Donaldson’s soft edges conjure up the ghost of Mark Rothko but with a wicked humour in the notion of extracting the drama of Rothko’s lugubrious soulfulness out of a can.