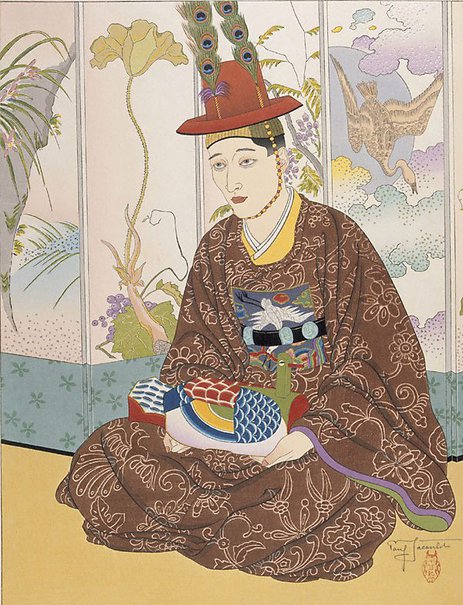 Paul Jacoulet holds a unique position in the world of international graphic art. Born as the only son of French parents, Jacoulet was taken to Japan in 1906 (the year of his birth is being disputed) as a small child, and remained in the country throughout the turbulent years of the Great Kanto Earthquake (1923), the depression (late 1920s) and the war (1937-45). He also travelled extensively, from his native France to Korea and the South Pacific islands under Japanese occupation.

After the Great Kanto Earthquake, Jacoulet began concentrating on painting with financial support from his mother in Korea. He painted initially in the style of the traditional Japanese ukiyo-e. In the 1930s, Jacoulet decided to turn his works into prints. At the time, there were two streams of printmaking in Japan: the Creative Print Movement (which insisted that the artist drew, blockcut and printed his own work) and the New Print Movement (the artist had his designs blockcut and printed by skilled professionals). Although he kept distance from the Japanese art circles, Jacoulet, a deep admirer of ukiyo-e prints, decided to take the approach adopted by the New Print artists. He initially employed Yamagishi Kazue, a skilled professional blockcutter and printer who is also a print artist in his own right (the Gallery has one of his works in the collection). Eventually Jacoulet and Yamagishi parted when the latter began to undermine the artist's control over the production of the print. He engaged other skilled professionals for his later prints.

Jacoulet's style is neither Western nor Japanese: it is hybrid. His subjects are 'exotic people' of Japan, Korea, China and the South Seas. While an 'Orientalist gaze' is apparent in the treatment of his subjects of what Richard Miles calls 'disappearing people', one can observe his strong sympathy with them. Furthermore, his 'Orientalism' is not a sentiment unique to the West, either: it can be comfortably placed in the modern Japanese context. Some Japanese painters contemporary to Jacoulet, notably Kawabata Ryûshi, share the same 'gaze' in the treatment of the islanders.

This print of a Korean groom was not made as a pair to Jacoulet's print of a bride (La mariée Seoul, Corée 1948) - also in the gallery's collection - although they deal with the same subject. These prints reveal the artist's psychological insight into a shy bride & a rather tense groom, both in traditional costumes richly coloured & printed.

Browse other works by Paul Jacoulet