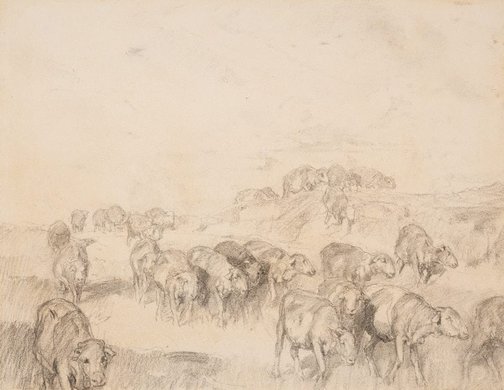 'Travelling sheep' is an important preliminary study for Heysen's watercolour 'Drought sheep' also in the AGNSW collection, arguably one of the most remarkable of the artist's watercolours which so boldly captures the hot dry conditions that accompany severe drought in Australia.

Heysen was a formidable draughtsman and watercolourist, though more usually it is his mastery in oil paint that is acknowledged. He was a fine draughtsman of the human form too, which this drawing of sheep on the move, indirectly demonstrates. Comparing his drawing 'Travelling sheep' with the watercolour' Drought sheep' is fascinating and revealing, bringing us closer to Heysen’s thinking processes. Though substantial in size, the drawing is about half the size of the watercolour, suggesting the artist was refining his composition and considering scale, or how much bigger to make the subject as a watercolour.

It is also immediately apparent that Heysen changed his mind about the inclusion of the sheep facing out in the left foreground of the drawing, because it is missing in the watercolour. With close scrutiny it is however possible to see faint evidence of the outer shape of this sheep in the dark shadow at the bottom left of the watercolour. Presumably he removed it at some stage in painting 'Drought sheep', which he deliberately dated "1916-31" lower left, openly acknowledging its slow and considered evolution. There are a number of other minor differences between drawing and watercolour that soon also become apparent. 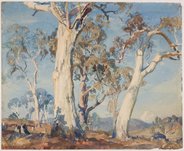