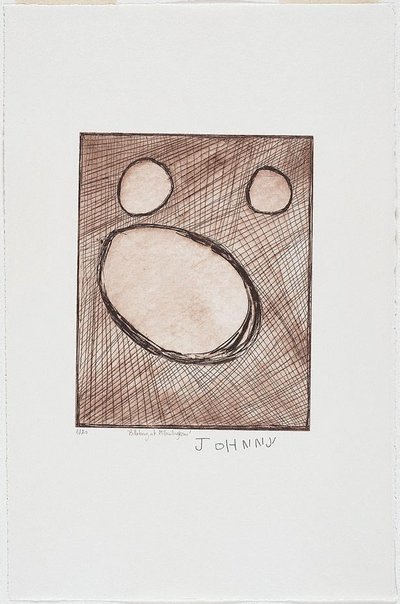 John Mawurndjul has depicted the billabong at Milmilngkan where Ngalyod - the rainbow serpent - resides under the water.

Kuninjku people say there are two Rainbow serpents. One is Yingarna who is said to have been the original creator of all ancestral beings, the 'first mother'. Yingarna's first born is a Rainbow serpent called Ngalyod. Yingarna - the Rainbow serpent - or her son Ngalyod are common subject on contemporary Kuninjku bark paintings. Ngalyod is very important in Kuninjku cosmology and is associated with the creation of all sacred sites, djang, in Kuninjku clan lands. For example, ancestral stories relate how creator or ancestral beings had travelled across the country and had angered Ngalyod who swallowed them and returned to the earth to create the site. Today, Ngalyod protects these sites and its power is present in each one. Ngalyod has both powers of creation and destruction and is most strongly associated with rain, monsoon seasons and rainbows which are a manifestation of Ngalyod's power and presence. Ngalyod is associated with the destructive power of the storms and with the plenty of the wet season, being both a destroyer and a giver of life. Ngalyod's power controls the fertility of the country and the seasons.

John Mawurndjul lives at Milmilngkan near this billabong and says that underneath the water lies the power of Ngalyod. In this etching, he depicts the power of the place with rarrk (cross-hatching) which contains Mardayin power.

John Mawurndjul AM
Billabong at Milmilngkan