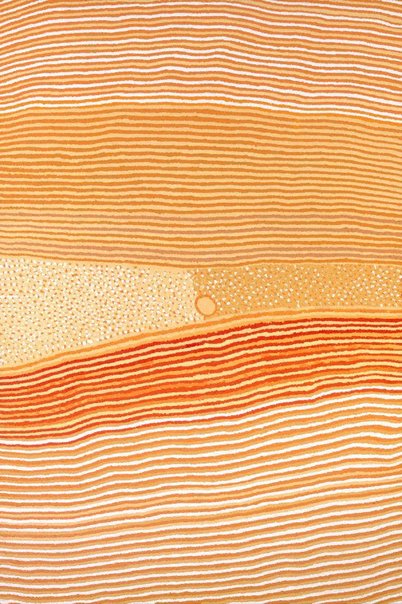 Helicopter Tjungurrayi's painting Wangkardu 2001 depicts some of his traditional country which is located far to the south-west of Balgo in the Great Sandy Desert. This country is known as Wangkardu named for the tjurrnu, or soakwater featured in the centre of the painting. It is also the country of Helicopter's father. It was in this country that Helicopter was born and travelled and hunted as a young man with his family, moving between the different tjurrnu. The majority of the painting represents the tali, or sand dunes which dominate the landscape of the area. In the centre is the inta, or living water, at Wangkardu around which people from many families would camp. It is also good country for hunting goanna and pussy cat and for collecting kumpatja (bush tomato) and kantilli (bush raisin).

The Warlayirti Artists website gives the following information: 'Born at Ninmi, Helicopter learnt from a young age the location of water sources and how to hunt for bush food. Helicopter is a 'Maparn' (traditional medicine man) and people travel hundreds of kilometres to see him for healing. He is also a respected painter alongside his wife Lucy Yukenbarri. In the early 1990s he painted with his wife, not seeking any acknowledgement.
Since 1994 Helicopter has been painting on his own in a distinctive linear style that emanates from the central feature of a soakwater. Helicopter travelled widely during the mission days to pick up supplies (Broome, Alice Springs and Wyndham). There are many stories of the endless tasks performed on the Mission; drilling for water, cutting timber for fencing, fixing the windmill. More recently helicopter has travelled with his paintings to Darwin, Adelaide and Melbourne. He remains dedicated to painting his country and the country of his mother and father where he lived as a young boy.'

Browse other works by Helicopter Tjungurrayi