At his first solo exhibition, at Tolarno Galleries in Melbourne in May 1968, Robert Hunter’s work was well received, so much so that he was included in 'The field' exhibition organised to mark the reopening of the National Gallery of Victoria. 'The field' made a decisive break with the past in presenting a small group of highly abstract colour field and minimal artists as part of an international movement to Australian audiences in Melbourne and Sydney. Hunter’s contribution consisted of extremely close-toned, near monochrome (white on white) paintings that tested the threshold of human perception but were too subtle for the technology of the time to reproduce in the catalogue; it is ironic that his work was not reproduced in the catalogue of the exhibition that launched his career.

Unlike the other artists in 'The field' exhibition, Hunter has remained faithful to his original vision and since then has consistently produced an indefinite series of ‘white’ non-objective paintings, built around the basic geometry of horizontal, vertical and diagonal grids. Made nearly 20 years later, ‘Painting no 3’ Sydney is painted with the same rigour as his earlier works and differs only by degree. Hunter first painted on squares of plywood. Now he paints on a rectangle the equivalent of two squares, approximately the width of outstretched arms. He paints on board to minimise any interruption to the picture plane, aiming for an impeccable surface, and uses Dulux Weathershield, a commercially prepared house paint, applied with a roller, for the same reason.

Hunter states cryptically that ‘They’re absolutely about flatness and yet they’ve become dimensional’.1 Faint traces of a grid inform the composition but the emphasis has shifted from an all-over composition to an emphasis on the top and bottom edges. Here deeper tones ranging from white to cream to pale grey pick out crystalline facets, where diagonal lines intersect to create triangular forms in the upper and lower pediments. The simple white on cream shapes move in and out of, and beyond, perception. Often the difference between adjacent areas is only the sensation of cool-ness or warmth. While stubbornly flat, the edges nonetheless produce a mild optical effect far removed from the dazzle of op art and closer to the shimmer of a mirage. With its regular patterns and rhythms, this parade of shapes slows and calms the eye before immersing it in the encompassing and almost hallucinogenic whiteness of the centre. Experiencing the flatness and tranquillity of Hunter’s paintings is like a pit stop in life, though in terms of Hunter’s severe aesthetic, this is a baroque moment.

Browse other works by Robert Hunter 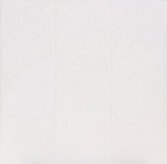