Untitled (mythological sculptural group at the Grand Palais), from The Paris 'private' series 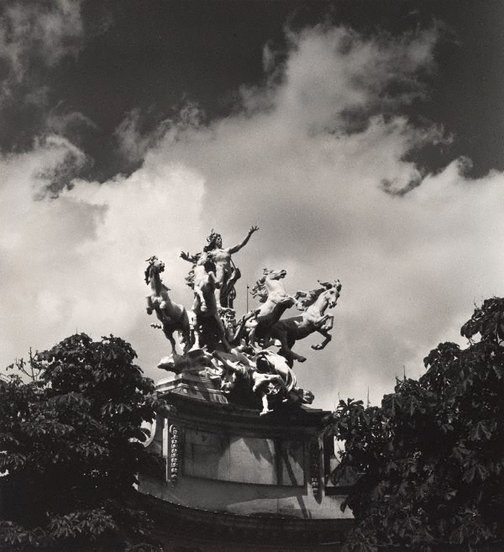 ‘I like to involve myself in, maybe, a small area geographically and work it out, as simple as that’ said Max Dupain in a 1991 interview.1 During his lifetime the photographer visited only three countries outside of Australia. His 1978 trip to Paris was made together with architect Harry Seidler, whose newly built Australian embassy building Dupain was commissioned to document. The long professional association between the architect and the photographer stretched back to the early 1950s, soon after Seidler’s arrival in Australia. Dupain, through his expressive architectural photographs, was closely involved in popularising the modernist aesthetic espoused by Seidler’s starkly functional buildings.

Conversely, the set of 21 photographs of Paris which Dupain compiled and presented to Seidler as a personal gift, does not contain any images of modern architecture. Primarily depicting 18-19th century landmarks such as the ornate Alexandre III bridge, the Grand Palais and Versailles this compilation offers a view of the city and its environs shaped by layers of history, mythology and art. Dupain was nonetheless well read in modern French culture and aware of photographers such as Eugène Atget and Henri Cartier-Bresson.

The Parisian images vary from pure architectural studies to compositions with an almost literary scope. They demonstrate Dupain’s signature trait of combining the formal and social aspects of photography. In some of the works, Dupain gives classical architecture the same reductive treatment he brought to modern buildings. Stripped of embellishments, these photographs bring to the fore the essence of order, logic and harmony which lies at the core of classicism. The presence of human figures in photographs such as that of Napoleon’s statue on the balcony of Les Invalides adds a dramatic element to the compositions. Dupain wanted ‘to extract every ounce of content from any exciting form and I want to give life to the inanimate.’2 Time and the built environment converge in this personal ode to Paris, manifesting the incessant flow of life and the connectedness of past with the present.