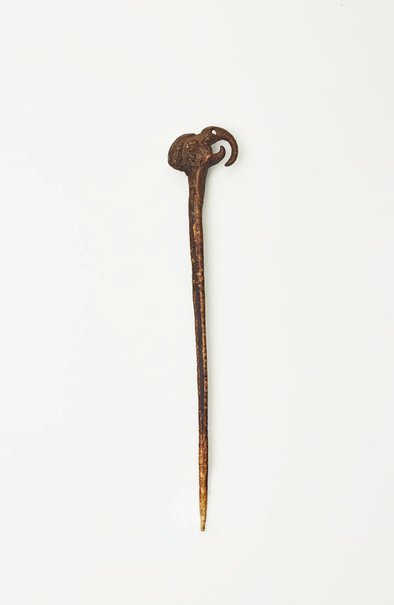 With its distinctive beak, the bird on the top of this 'taph' (lime stick) was identified by Justin Kami of Tambanum village as the 'maingie', or palm cockatoo (Probosciger aterrimus), a totemic emblem of a particular clan group in the Sepik belief system.

Among the Iatmul, who originated from the Sawos-speaking region north of the Sepik River, tribes are broken down into many 'ngaiva' (patrilineal totem clans), which are divided into moieties called 'nyowe' (sun) and 'nyame' (mother/earth). This duality arises from Iatmul origin myths. In the primordial waters, there lived a dual being in the form of a crocodile, Karokmali – Jamburamali. The spirit Karambuangga separated these beings: Jamburamali became the sky and Karokmali remained below and became the earth.

Browse other works by Iatmul people