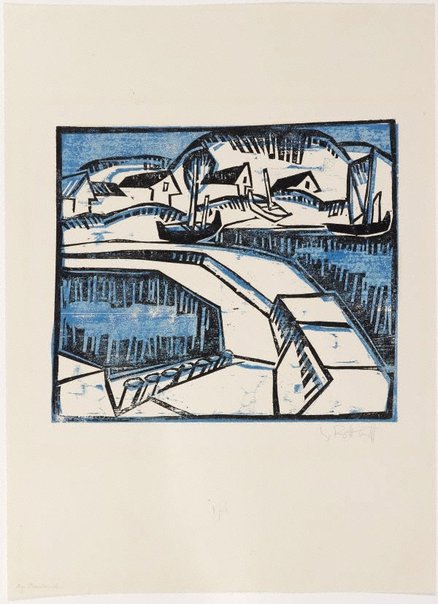 Karl Schmidt was born in Rottluff, a town near Chemnitz, where his father owned a mill. After leaving school in 1905 he went to Dresden to study architecture and co-founded the Brücke group, having been introduced to Ernst Ludwig Kirchner and Fritz Bleyl by Erich Heckel. In 1906 he added Rottluff to his name. From 1907 to 1912 he spent the summers at Dangast, a fishing village on the cost north-west of Bremen, occasionally joined by Heckel. Later he spent time in the remote Baltic coastal towns of Nidden and Hohwacht.

Unlike other members of the Brücke who treated subjects of urban modernity, Schmidt-Rottluff’s thematic concerns focussed more on unpeopled rural landscapes which he viewed as a haven from the problems of city life.

Although ‘Dunes and pier’ is dated to 1917 it relates to landscapes from 1913 and 1914 depicting the bay and fishing boats of Nidden. It appears that the woodblock was carved in c.1913 but that the artist’s conscription into the army prevented him from completing the print until 1917 when he presumably cut the second block (to print the blue). The full edition of 100 was printed in the studio of F. Voigt, Berlin for Hyperion Verlag, Munich in 1923. The present impression features two hues of blue, one darker and more viscous than the other, creating a richly variegated surface. The blue block was printed first then the black drawing was printed on top of the blue impression. For the Hyperion edition only one hue of blue was used.

colour woodcut, printed in black and two shades of blue

Browse other works by Karl Schmidt-Rottluff