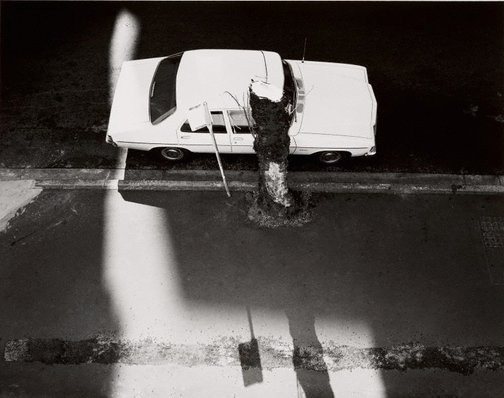 After relocating from USA to Australia in 1973, Ed Douglas spent a few years living in the country prior to taking on a teaching position at Sydney College for the Arts in 1976. The series ‘City-spaces’ was commenced in Sydney and then developed further when Douglas moved to Adelaide in 1977. Having been schooled in the formal traditions of American documentary photography, Douglas’s images appear like notations of an urban explorer attempting to locate himself in a new country. Seemingly fragmentary, they look at the specificities of the mundane and the ordinary. Close acquaintances such as photographers Ingeborg Tyssen and John F Williams appear in ‘City spaces #29’ and ‘#28’, indicating the personal nature of the series.

Intimately scaled and tonally rich, the black and white images exalt the formal beauty which can be found in the random textures of daily existence. They are also permeated with gentle humour and a sense of quiet drama that unfolds in the strangely misplaced confluences of objects, figures and spaces. Douglas’s interest in the formal and emotional qualities of topography was emblematic of new approaches in documentary photography of the time. His 1983 series of colour photographs depicting the gypsum mine on Kangaroo Island (collection of AGNSW) developed this trajectory further by fusing the aesthetics of abstraction and objective documentation.

Browse other works by Ed Douglas