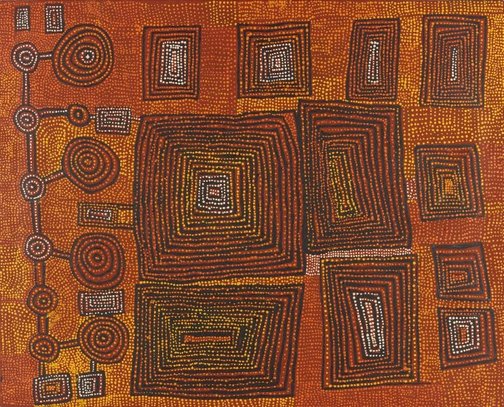 The Papunya Tula documentation for the work states:

This painting relates to the claypan site of Muyinga, slightly west of the Kintore community. In ancestral times a group of Tingari men of the Tjampitjinpa and Tjangala kinship subsections camped at this site as they travelled towards the west. The men later visited at an important site known as Ngurrapulangu, which is represented by the large concentric squares. This is a low lying area situated at the base of a long escarpment which consists of a number of huge claypans. The roundels also represent other soakages and rockholes that the men visited at sites further west, which included Yumari.

Since events associated with the Tingari Cycle are of a secret nature, no further detail was given. Generally the Tingari are a group of mythical characters of the Dreaming who travelled over vast stretches of the country, performing rituals and creating and shaping particular sites. The Tingari men were usually followed by Tingari women and accompanied by novices and their travels and adventures are enshrined in a number of song cycles. These mythologies form part of the teachings of the post initiatory youths today as well as providing explanations for contemporary customs.