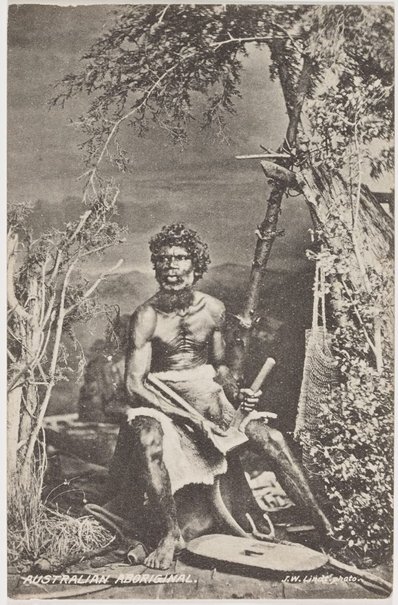 J W Lindt was a professional photographer and amateur ethnographer. Born in Frankfurt-am-Main, Germany, he arrived in Australia in 1862, where he worked initially as a travelling piano tuner and repairer in country New South Wales and Victoria. In the late 1860s he worked as an assistant in the Grafton studio of Conrad Wagner. He took over as manager in 1868 and opened a second, more luxurious studio in 1870, producing portraits and views of paddle steamers, wool drays, sheep stations and local gold-mines. In 1873–74 Lindt produced a series of studio portraits of Aboriginal people from the Clarence River area posed in elaborate tableaux against painted backdrops. Despite their obvious artifice, the photographs were considered ‘truthful’ likenesses and purchased by the government of New South Wales for presentation to museums in Britain. In 1877 Lindt established himself in Melbourne, producing images of the new public buildings, gardens, people and ports. In 1880 he was commissioned to photograph the capture of the Kelly Gang at Glenrowan. Lindt was a keen ethnographer and undertook expeditions to New Guinea, the New Hebrides and Fiji in the 1880s and 90s. The depression forced him to close his studio in 1895.

From 1905, picture postcards superseded carte de visites in popularity and circulation. Postcards were printed directly from negatives or via photoengraving and were frequently hand coloured. Mass-produced and easily distributed, postcards allowed photographers to develop a lucrative market for their professional output. With postcards, the dissemination of photography was integrated into broader communication systems as well as the tourist industry.