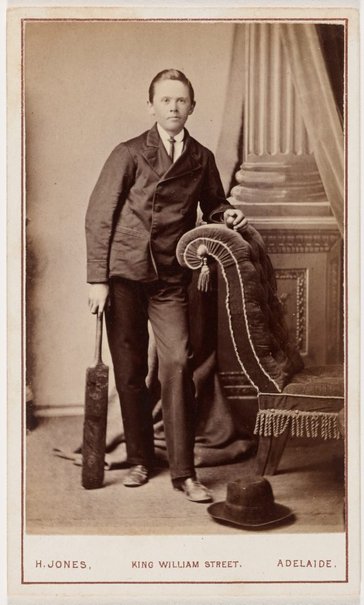 Henry Jones was a professional photographer based in Melbourne and Adelaide. Born in England in 1826, he arrived in Victoria with his family in the late 1850s. In 1859 he established a studio, advertising his services as a daguerreotypist and photographic artist, and began producing pannotypes, photographs printed on leather which were possible to send through the post. Jones worked from a number of different addresses in Melbourne before moving to Adelaide to work as a camera operator for Townsend Duryea in 1866. In 1870 he opened his own studio in Adelaide in conjunction with a watchmaking and jewellery business. From this location Jones produced a pair of large mosaics, composite images made of hundreds of tiny paper photographs of men and women who had attended the ‘Old Colonists’ banquet in 1871. The mosaics were received as valuable mementos of the pioneer colonists of South Australia. On the strength of this project, Jones received a vice-regal commission to photograph the Governor of South Australia, Sir Anthony Musgrave. In addition to his official, memorial work, Jones also specialised in photographs of children, and renamed his firm The Children’s Photographic Company in 1879.