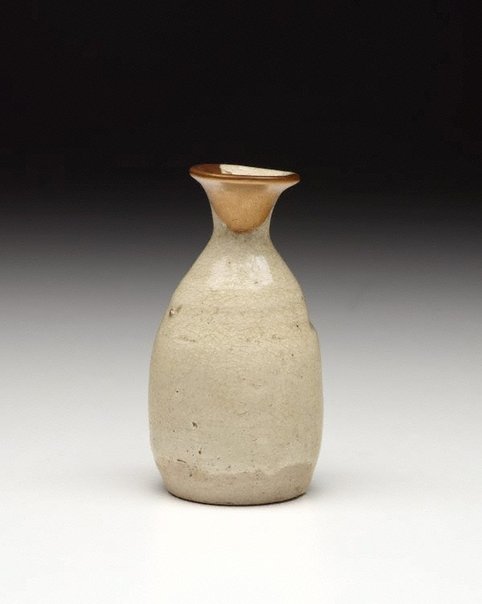 Besides being a fine example of early Edo period ceramic drinking utensil produced in the Mino kilns (Gifu Prefecture), this Seto ware sake bottle holds particular interest for its 'kintsugi' (lit. ‘to patch with gold’) , or repair with gold lacquer. The mended part of the sake bottle is decorated with stylised coin motif in gold 'maki-e'.

Due to its outstanding adhesive quality lacquer has been used to mend ceramics in Japan for many centuries. Since the 16th century, however, this technique has been cultivated to a highly distinctive and fascinating Japanese art form, as craftsmen ennobled the mending by sprinkling the lacquer with gold or silver powder, bringing the broken object thus to new life and adding a whole new level of aesthetic complexity. The appeal of the delicate ‘golden veins’ zigzagging across a coarsely glazed surface of a tea bowl or tea caddy has captured the imagination of renowned tea masters such as Sen no Rikyu and Furuta Oribe, who saw in them the perfect embodiment of the 'wabi' and 'sabi' aesthetics, central to their style of 'chanoyu'. Moreover, Japanese collectors from the 16th centuries onwards were also attracted to the notion of ‘rebirth’ behind the costly restored ceramic pieces. Instead of being discarded when broken or damaged (sometimes due to mistakes that happen during the firing process), the object could gain a better, more unique appearance after being mended with gold or silver lacquer and consequently is more valuable than an intact piece.

Browse other works by Seto ware 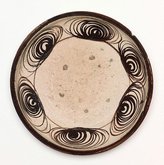 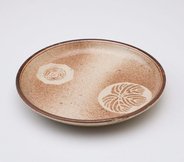