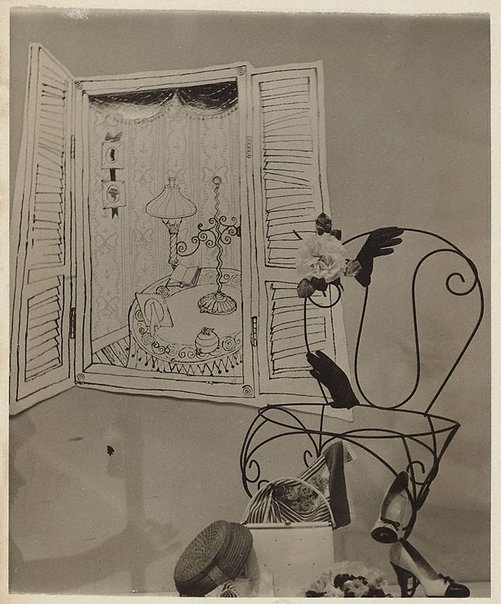 Photographic illustration was pioneered in Sydney by Russell Roberts who sold advertising for Ure Smith’s publications from 1931. By 1938 his photography studio and advertising agency had a staff of 30.1 ’The Home’ magazine was the major promoter of new styles and new products especially aimed at women. Clothes, interiors, architecture, cars, gardens and products were promoted using the style of new photography. Previously these had been presented as still-lifes, either photographically or as simple line drawings.

Marie Lee’s advertising study presents an ambiguous space with a drawn backdrop showing a view through into a domestic interior. The wrought-iron ‘chair’ is simply a prop to show off the hat, shoes, gloves, scarf and bag. The shadow to the bottom left could represent a potential buyer reaching for the desirable objects. The lighting is such that this was probably a studio set-up rather than a photograph of a shop window. However, whether this work was for a specific advertisement or an exercise is unknown. Women did work in commercial studios in the 1930s and 1940s, for example Margot Donald at Russell Roberts, and Olive Cotton at the Max Dupain studio, but after the war they were relegated to less responsible jobs.

Of Marie Lee nothing is known except that this photograph was in the collection of A W Gale who worked at the Sydney photographic retailer Herbert Small from the 1940s and was a member of the New South Wales Photographic Society. Conceivably, Marie Lee was also a member of the society and this print does have an exhibitor’s number attached to it.