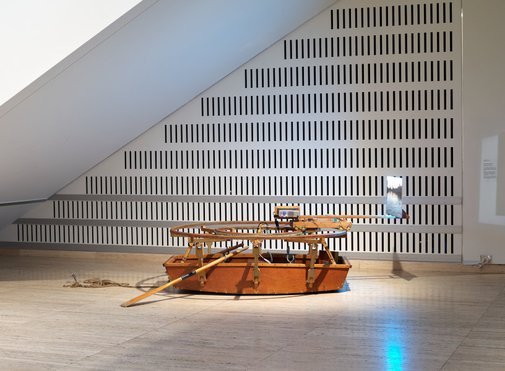 After graduating from art school in 2001, Conrad Shawcross quickly became known for his fantastical apparatus or kinetic sculptures that somehow blend antiquated technology with art. At the time of writing he is one of the youngest of the Young British Artists (YBAs, as they have come to be known) to come to the fore in England. Like many of the previous generation (Damien Hirst and Tracey Emin for example) he explores the boundaries of art and life and his work tends towards the extravagant gesture. Yet unlike many, his objects are beautifully handcrafted sculptures that actually function rather than simply look like something that might. They are not assemblages of found objects, although they may incorporate them; neither are they fabricated by a workshop.

This making and functioning with old-fashioned materials – mostly wood – is subtly subverting aesthetic delectation by conceptual displacements. Alongside the sculpture, in fact underlying its raison d’être, is a strong performative element and often an elaborate narrative or fiction. In his first year out of college, Shawcross was to be found driving around London on behalf of the ‘fictive’ organisation IBLS (Investigative Bureau into the Location of the Soul) – a cunning historical/ philosophical spoof. The plot starts just after World War II when his fictive hero, Bruce Springshaw, realised that the age-old project of measuring or capturing souls could be achieved in the air rather than by trying to separate the souls from living bodies. His 12 Soulcatchers, Ford Capris equipped with fishing rods and kites, set out across Europe in search of souls but all go missing.1

The Capris were modified with handmade wooden elements in much the same way as Shawcross has modified the boat in ‘Pre-retroscope (marine)’, a piece based on a small, wooden working boat. Mounted on its top is a large circular track which slowly rotates. Originally this track was designed to take a revolving video camera that filmed 360-degree panoramas of the canal and industrial landscape as Shawcross rowed out onto a canal in East London. Back in the gallery the camera was replaced by a projector and a screen onto which the original footage of the voyage is projected. Alternatively the screen was removed and the projection focused onto the gallery walls, like a lighthouse beam in a darkened space. Using the screen, however, adds a dimension of difficulty as we can never keep up with the panorama without pacing around the boat as the screen rotates, an action made difficult by the oars that stick out from the rowlocks and the anchor that trails behind.

As the projector rotates on its track at the same speed as the original camera, the centre of gravity shifts and the boat very slightly sways, simulating the creaking of a boat at sea. Within the boat are emergency rations and flares: it is in effect a working boat that could readily be returned to the water just as it is and yet it also represents a metaphor of temporal and spatial displacement.

1. Shawcross claims to have recently discovered Springshaw’s own soulcatcher in a Russian field and meticulously renovated it, or so the story goes. The resulting Heath Robinson-like device mechanically operates and Shawcross has been seen trawling (unsuccessfully as far as we know) for souls in London’s Hackney