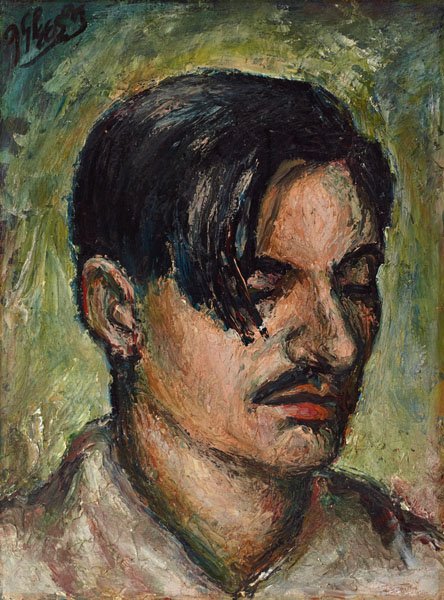 James Gleeson is widely regarded as Australia’s foremost Surrealist painter. During his studies at Sydney Teacher’s College in 1938, he discovered the dreamlike work of Bosch and Brueghel and the Mannerist landscapes of the Spanish master, El Greco. That same year Gleeson exhibited his first Surrealist work.

Further compelled by the art of Dali, Picasso and El Greco, and with the outbreak of war in 1939, Gleeson began to read the theories of Freud as well as Carl Jung’s writings on the psyche, and exploring undercurrents within his own subconscious.

'Self portrait' c1941, reflects the artist’s introspection during this time and was used as a basis for his major painting of the period 'Structural emblems of a friend' (1941), which features the same three-quarter profile of the artist’s head, set against a surreal landscape populated by the figures of a bride – possibly an image of the soul or psyche – and a young boy holding a balloon, symbolising the past.

oil on canvas on hardboard

Purchased with funds provided by the Gleeson O'Keefe Foundation 2012