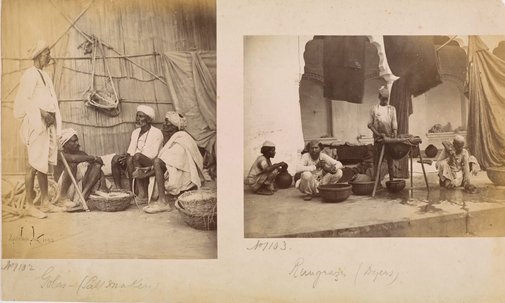 The photograph on the left is of golas (salt makers) in Rajasthan, India. This image shows a group of four men, three seated and one standing, gathered round a basket of salt. John Forbes Watson wrote in volume four of The People of India (1869-72), in which this photograph was reproduced, "The Golahs are a low class caste or tribe of Hindoos, but by no means one of the outcast tribes...the Golahs are professional salt makers, while they are also general cultivators; for it is only in the hottest weather that they can carry out their work as salt makers...In domestic customs and religion, the Golahs do not differ from the Jats or Goojurs in any remarkable degree...Their women are not secluded, and assist their families both in field labour and salt making."

The photograph on the right shows people from the caste of dyers (rangrez) at work in the city of Delhi. This photograph was published in volume four of John Forbes Watson's The People of India (1869-72). The accompanying text states, "A few large pans for mixing the dyes, trestles for supporting the straining cloth, and a press are all that are used in the simple operations of the craft...The craft is hereditary; and the secrets of mixing colours, methods of extracting the dyes, of the use of mordants, and of producing every variety of tint that may be necessary, descend from father to son, and have perhaps been little changed in the course of ages...the colours produced by the Indian dyer are for the most part very pure and beautiful."

Browse other works by Shepherd & Robertson