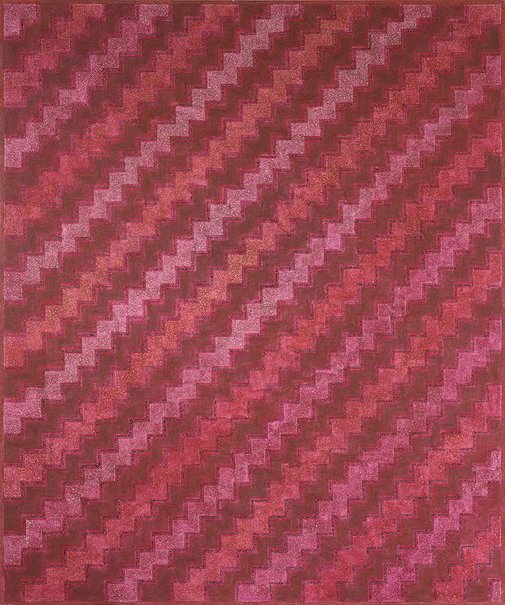 Savanhdary Vongpoothorn has established a reputation for her lyrical abstract canvases and works on paper in which references from Lao culture and contemporary western art are overlaid. She was born in Laos in 1971 and migrated to Australia in 1979. Vongpoothorn has in recent years consciously studied aspects of Lao culture including intricate textiles traditions, Buddhist calligraphy and music. She is also interested in minimal abstraction, something which is more apparent in her works on paper and more mutely coloured canvases.

The influence of her interest in Laotian textiles can be seen in this painting in which the stepped design refers to the popular Naga or river serpent pattern. The Naga is a minor deity in both Hindu and Buddhist traditions, which takes the form of a large river or lake dwelling snake. The veneration of Naga is a strong tradition is Laos however, where the Naga are believed to inhabit the Mekong river and to dominate local interaction with the river. In this painting Vongpoothorn works with the kind of intricate patterns and flickering colours found in Lao textiles. She uses acrylic paint applied in various ways to create different textures that reconfigure the form of the Naga into a diagonal series of shapes that seem to snake across the canvas. Further texture is added to the canvas by a series of perforations which Vongpoothorn makes from the back of the work. The piercing of the canvas is a pricking of the containment of the canvas, allowing air and space to become part of the work. Equally the labour involved in this act refers to the time and concentration necessary for weaving textiles.