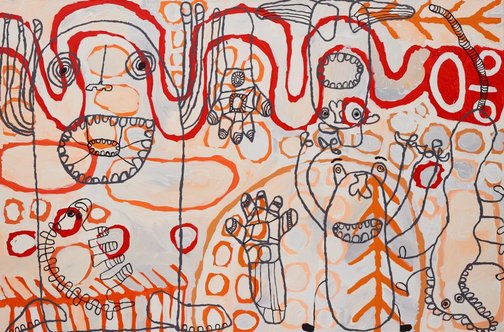 Tiger Yaltangki grew up in Indulkana and has painted through Iwantja Arts in Indulkana for many years. Whimsy and fantasy inform his practice as he combines elements from his Anangu culture with science fiction and his love of music from ACDC and Hank Williams. Yaltangki’s works offer a unique image of contemporary life and explore the divergent influences that have shaped his world view.

Yaltangki makes known his love of science fiction television in ‘Doctor Who’ 2016. Populated by a cast of hybrid figures with animalistic features rendered in simple line-work, layered with an array of geometric shapes and graphic forms, this work evokes the wonder of possibility offered by the television series. It seems the perfect image of time travel and parallel universes as obscure elements and characters jostle for space in a multidimensional field. Imbued with a sense of curiosity and humor, Yaltangki’s cast exist in a dreamlike state where diverse influences mingle and coalesce.

Browse other works by Tiger Yaltangki