The month of Ashadha (June-July), from the series Baramasa series (Songs of the twelve months) 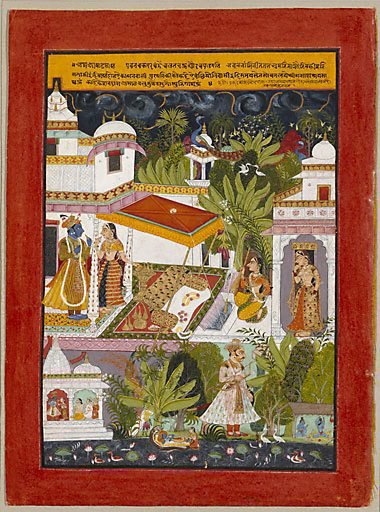 'Furiously blow the whirlwinds.
Only the demented leave their homes
and loved ones to go out.
Even the wandering ascetic stays put, birds
are afraid to stir out of their nests, let alone
the human being.
Vishnu rests at this time in the
ocean of cream with Lakshmi.
Says the poet Kesavadasa
neither the Vedas nor tradition
approves leaving home
in the month of Ashadha.'

'Baramasa' or 'Songs of the twelve months' is a poetic genre that describes each of the months of the Indian calendar in terms of love and its rhetoric. Composed in Hindi and other regional languages, these lyric are sung, mostly by women. This verse, from the well known 'Rasikapriya' of Keshavadasa composed in the 1690s, is translated [above].

The iconography of this beautiful Bundi picture is even more complex than the verse. The burden of the poem is expressed largely on the lower panel with the ominous sky at the top. Along the 'ocean of cream' with lotuses and aquatic birds, a temple of Krishna and Radha is on the top left. Then below a banana tree is the sleeping Vishnu beside whom is a prince with bow and arrow whose size completely disproportionate to everything around. Does he represent a demented human or is he returning home? Next in a small hut an ascetic sits on a tiger skin in yogic posture and converses with another.

In the middle ground is a palace scene that is not described in the text. A princely Krishna is being escorted by a maid to the prepared bed with bolsters, flowers and bottles below a canopy. Another maid waits on the other side as Radha appears through a door on the far right for the tryst. It is possible that this composition represents an anticipatory love scene enacted in the mind of the prince returning home at the start of the rainy season when lovers are united.

Illustration to a Baramasa (twelve seasons)

The month of Ashadha (June-July)