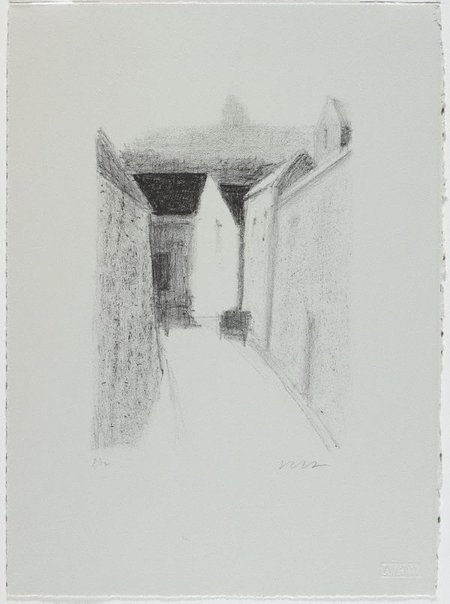 While Kevin Lincoln has long made sketchbook drawings and watercolours of landscape, he has not made prints of the subject until now. On a trip to France in October 2010, he visited an artist friend from Melbourne, who now lives in a village, Gometz-le-Châtel, 25 kms south west of Paris.

On the trip he carried some small lithographic plates with him, in order to make some drawings for editioning later in Melbourne at the Australian Print Workshop. The largest plate he used to make this work, the only landscape subject in France (the others he made in Holland).

The drawing was made on the plate in lithographic crayon in situ, in a small street in the village. The outline of the local Church of St Clair is visible in the background, on the horizon. In many ways the print is not dissimilar to Lincoln’s sketchbook landscape drawings, both of which are rapidly executed and capture a particular, dreamy mood in their fine rendering of tone.