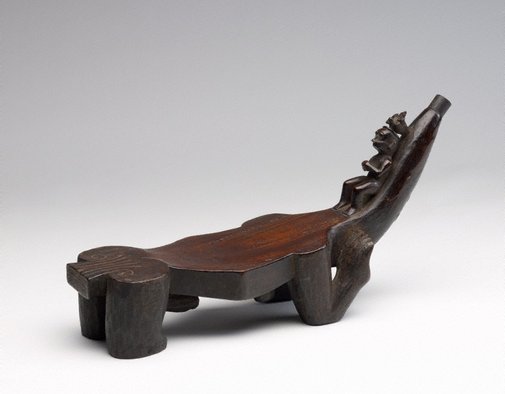 On Nias all significant events in an individual’s life cycle (including birth, puberty, marriage and death), as well as those concerning the community as a whole, were accompanied by a complex system of rituals and festive observances. Specific ceremonies and large feasts were held to mark the acquisition of status and wealth by aristocrats and commoners, and also required for the creation of temples, monuments, buildings and gold jewellery. The importance of ritual feasts – which ultimately honour and appease the deities and ancestors – resulted in the prolific production of monumental sculpture in stone as well as the creation of ceremonial implements. Carved in the form of a four-legged creature with prominent male
genitalia, this seat once incorporated a serrated blade at the top of the neck to remove the flesh of coconuts. The exceptional workmanship of the stool, which resembles the large stone ‘osa-osa’ seats carved for ‘owasa’ feasts of merit, and the presence of a small crowned ancestral figure, suggest it was used for a significant feast sponsored by a high-ranking aristocrat.

Purchased with funds provided by the Christopher Worrall Wilson Bequest 2011