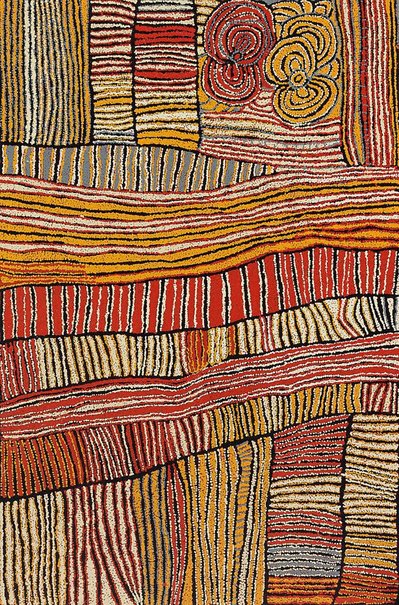 Walangkura Napanangka was born in the mid 1940s in the area that it is now home to the community of Tjukurla, WA. She grew up travelling with her large family group in the country between Punkilpirri, near Docker River, and Walukirritji rockhole on the south western side of Karrkurrintinytja (Lake Macdonald). Her family were met by a welfare patrol which included Nosepeg Tjupurrula, and were invited to travel in with other Pintupi people to the Ikuntji (Haasts Bluff) settlement. While living in Ikuntji Napanangka worked in the community laundry.

She later moved to Papunya to live with her husband Uta Uta Tjangala who was one of the original shareholders of Papunya Tula Artists. Napanangka first painted for Papunya Tula Artists in 1997. Since 2002 she has spent more time living at Walungurru (Kintore) and Kiwirrkura and as a result has painted more regularly. In 2005, Napanangka won the Redlands Westpac Art Prize and in 2006 was included in the Alice Prize at the Araluen Centre, Mparntwe (Alice Springs).

The Papunya Tula Artists documentation for this work states:

"This painting depicts designs associated with the lake site of Tjukurla, near where the community now stands in Western Australia. During mythological times a group of ancestral women gathered at this site to perform the dances and sing the songs associated with the area. While at the site the women spun hair-string, to make nyimparra (hair-string skirts) which are worn during ceremonies.

The women also gathered large quantities of the edible fruit known as pintalypa (pura - bush tomato) from the small shrub Solanum chippendalei. This fruit is the size of a small apricot, and after the seeds have been removed, can be stored for long periods by halving the fruit and skewering them onto a stick. The pintalypa in this work is represented by the small circles.

Upon completion of the ceremonies the women continued their travels north toward the rockhole site of Illpilli and then onto a site near Nyirrpi. The lines in this painting represent the tali (sandhills) surrounding this site, while the arc shapes are the women sitting down."

Purchased under the terms of the Florence Turner Blake Bequest 2006