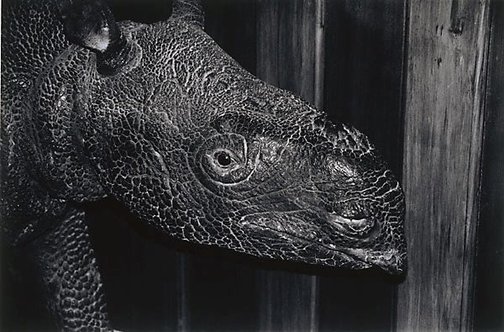 Peter Peryer's photographs deal with the enigmatic and uncanny in a subtle and poetic way. Indeed, the artist does regard his photographs as poems, and that the layers of meaning which emerge through looking at the work is an important part of the subject matter.

This work is part of an ongoing body of work which Peryer has called 'Third Nature'. 'Third Nature' continues the artist's interest in the intimate relationships between the ordinary and eccentric; natural and man made objects; the metaphysical and mundane; history and the present. These relationships are never posed within the photographic frame as being anything other than complementary and overlapping.

'Java Rhinoceros, Canterbury Museum' 1997 has a similar background to 'After Rembrandt' 1995. In this instance, the rhinoceros that Dürer drew several centuries ago has been rediscovered, stuffed, in a New Zealand museum. The texture of the armoured skin of the animal against the vertical planks of the wall is visually disconcerting: one of Peryer's ongoing modes of practice is to play with our perception of texture and scale, with what we recognise but don't understand in order that we might see the familiar from a new perspective.

Peryer spends a great deal of time thinking about and setting up each photograph. He will also travel great distances in order to find the right object to photograph. Consequently the number of images he produces each year is very small.

Purchased with funds provided by the Photography Collection Benefactors' Program 1998

Bill Milbank (Director), At home and away: Recent photographs by Peter Peryer, Wanganui, 1997, back cover (illus.).