When Bryan Robertson wrote an article on Tim Storrier's first London exhibition in 1983, he recalled six years earlier, during a visit to Australia, seeing one of the young painter's startling desert images in a private collection:

'... one of a series of isolated images of desert wells, square and manmade in their flat dry immensity of surrounding wilderness, the well reflecting blue sky and surrounded by roseate brick and endless expanses of almond-pale sand, an almost diagrammatically simple image seen from above as if by a bird and expressed through pale, clean colour and a fresh, unfussed painted surface'.

He might have been referring to 'Isolation', in the Gallery's collection, completed when the twenty-eight-year-old artist was reaching his highest pitch of fascination for desert themes. After studying at the National Art School in Sydney he had set off for a world tour in 1971-72, travelling across western America in a clapped out Rambler and finished, after a period in Europe, in the Middle East where Egypt fired his imagination above all other landscapes.

Another painting 'The afternoon', was purchased by the Gallery from Storrier's exhibition in 1994; a vast, bleached site of broken columns projecting a faded metaphor mocking the vanities of civilization. Since then, the artist has worked through other themes that play out a romantic, often self-conscious symbolism that has become part and parcel of his painterly ventures.

Storrier is noted for his fine skills as a draughtsman and craftsman of the brush; and as an artist with an impeccable sense of the light, space and distance which define humanity's place in the universe. For above the occasional quirk of his subject-matter, these qualities consistently define his vision with distinction.

For his current exhibition he has painted a series of paper gliders suspended in flight against a range of ravishing skies. They are a clever reference to his interest in simple architectural forms of the ancient world, but as transient as the newspaper from which they are made; as evanescent as the air which bears them aloft; and as elusive as the pale glow which will turn and change against the light within the angles of their folded shadows.

'Boys own modern' depicts the tail of the glider burning, perhaps - like Icarus too close to the sun - a tragic consequence of impractical ambition. It is one of Storrier's most exhilarating, romantically charged images.

Browse other works by Tim Storrier 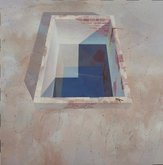