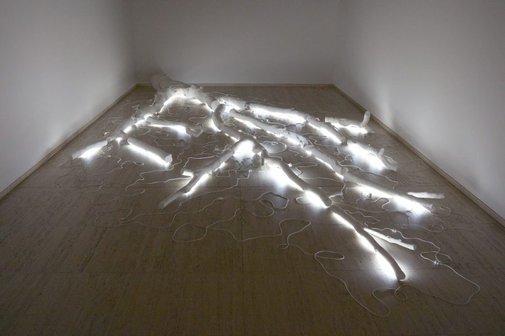 'The south-east of Australia is defined by the Murray–Darling River system. The country’s largest network of rivers, seasonal creeks, wetlands, floodplains and billabongs, it is the most fertile and resource-rich area of Australia. For countless generations the region has supported many different nations, their languages, people and ceremonies. The freshwater system connects nations like Kamilaroi at the top of the catchment to Ngarrindjeri where the river meets the sea. Stands of red gums line the banks of the rivers, with canoes made from their bark crafted to navigate the environment. This region was one of the first to be colonised, with diseases such as smallpox carried along the river ahead of any contact with white people, severely decimating the population. Lands were conquered, the rivers dammed and diverted, wetlands drained and bodies dumped in the river. This lifeline to the region has waned in recent years. Dollars are valued more than life. Once a trope of colonial painting, used to frame the western imagination in this vast landscape, the gum tree has fallen. Caked in white ochre, the tree traces the memory of the river, creating an Aboriginal framework that challenges the western perspectives that have been imposed on an Australian setting.' Jonathan Jones 2018

Browse other works by Jonathan Jones