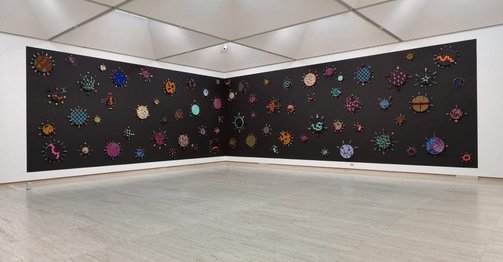 Yinka Shonibare is a London-based artist who grew up in Lagos, Nigeria, before returning to London to study at the Byam Shaw School of Painting and Drawing in 1984. Four year later Shonibare continued his artist education at Goldsmiths College where he first made artistic use of ‘African-style fabrics’ - a transcultural textile inspired by Indonesian Batik design, produced by a Dutch manufacture, and sold in markets around the world including London’s Brixton Market. Shonibare’s use of this fabric is seen throughout his body of work, including sculpture, mixed-media installation, film, photography and, replacing linen, as canvas for painting.

Shonibare’s first large-scale painting installation was created in 1994 with a work entitled ‘Double Dutch’. Referencing the modernist grid, this early work presented 50 rectangular paintings that were identical in shape and spaced evenly on the wall. In contrast ‘Alien toy painting’ offers an alternative system of ordering, signification, and meaning. In particular, the use of alien toys in the work signify the experience of social alienation and cultural exclusion, while referencing the inherent globalism attached to mass-produced commodities.