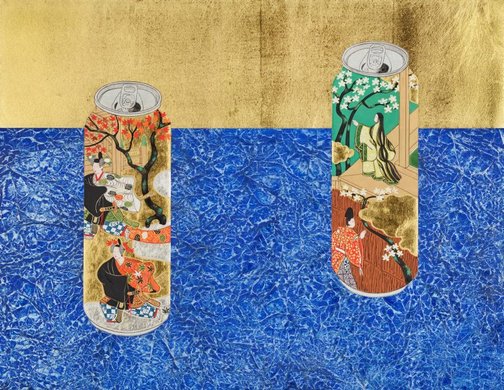 A graduate of the renowned Kyoto University of Arts and Design (Kyoto Zokei Geijutsu Daigaku), Tarō Yamamoto has gained acknowledgement for his witty and imaginative approach to Japanese paintings since the beginning of the 21st century.

Reflecting on the fact that major Japanese beer makers employed traditional East Asian motifs such as the mythological animal Kirin or the God of Fortune, Ebisu, as emblems for a beverage that was imported to Japan from the West, Yamamoto suggests to employ illustrations from the 10th century novel 'The Tale of Genji', arguably the epitome of classical Japanese culture, as decoration for the popular drink.

The can on the right is decorated with an image illustrating chapter 5 (‘Young Murasaki’) of the Tale, an episode that took place in Spring at the time of the cherry blossom. The image on the left can illustrates an episode of chapter 7 (‘Beneath the Autumn leaves’), in which Genji performed a dance at a party to celebrate the autumn leaves.

Yamamoto appropriates the standard iconography for illustrations of the 'Tale of Genji' as established by artists of the Tosa school, which was patronised by and catered to the court aristocracy, to embellish the disposable containers of the ‘seasonal beer’, a recent marketing strategy of Japanese beer makers.

The two richly decorated cans are placed against a background made of two blocks of solid colour. The gold in the upper half mimics the golden screens depicting scenes of classical literature. The brilliant blue in the lower half, on the other hand, represents the plastic blue sheets often used by contemporary Japanese as 'picnic rugs'. ‘High’ and ‘popular’ culture, traditional and contemporary Japan, East and West coexist thus harmoniously in the limited space of this painting, mirroring the hybrid state of contemporary Japan’s society and culture.

Browse other works by Yamamoto Tarō