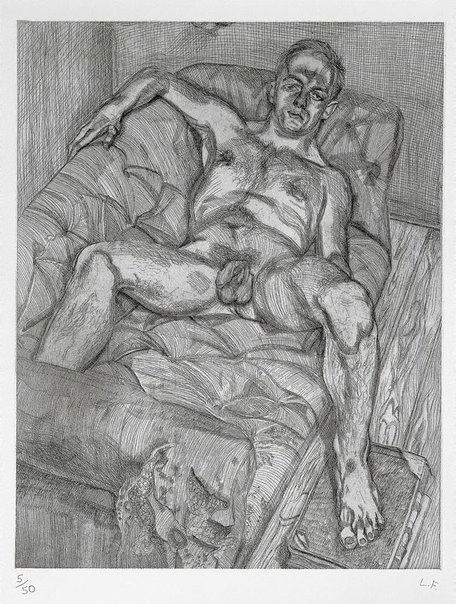 Although Lucian Freud is recognised more for his visceral paintings in which he aims to make paint ‘work as flesh’, his drawings and etchings map the body, revealing its nuances, sagging flesh, sinew, rises and hollows. His figures have been described as naked rather than nude: naked in the sense that they reveal more than flesh; they bare the figure’s soul. Freud’s method of working from the centre to the edge of a drawing is an action of ‘drawing out’, of pulling, yanking, stretching the lines of the figure to its utmost boundary, of ‘revealing’ not just displaying its nakedness. Freud’s natural predilection for drawing led to etching as a process of capturing his subject and reflects his earlier painstaking method of painting with small sable brushes.

In ‘Man posing’, the etched line comprised of faceted, hatched, stroked and slashed marks reveals the smallest, most insignificant details. From the awkward eyes, sullen and ill-formed mouth and hairy torso to the flaccid penis, the weight of the leg on the book and the innards of the sofa spewing out toward us, Freud’s line cruelly sweeps across his subject. The incessant texturing of linework on the body is reflected in the surface of the sofa, which also takes on a bodily nuance. Freud applies his excruciating line of truth to his own self-portrait of 1996 (AGNSW collection). At 74, his hollowed features reveal a disillusioned face with drooping skin, furrowed brow, worn empty eyes and a sinewy neck atop an ample expanse of flesh. The process of ageing and the act of representation combine here to ‘form’ the body rather than merely imitate it.

Rather than locating the model in the studio, ‘Girl sitting’ 1987 (AGNSW collection) floats in an empty space and, as in many of his drawings, the erased line-work traces the movement or adjustment of the sitter and the drawer. The figure is pushed up into the top register of the etching plate that was cut down to reinforce the compositional elements. Freud comments that he tries to look at a subject from several angles, attempting to show everything and not miss anything that may be of use to him.1 His uncompromising aim is to reveal his subjects rather than just paint or draw them – the work is not a picture of the person, but is the person – and is reflected in the intimacy formed with his subjects over long and arduous periods of posing. Freud reportedly gives his sitters Retsina in order to dull the effort of remaining still through frequently difficult and painful poses, although the anguish of his tortuous method often shows on the sitters’ faces.

Browse other works by Lucian Freud 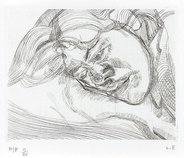 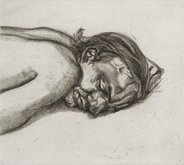 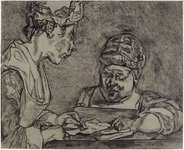