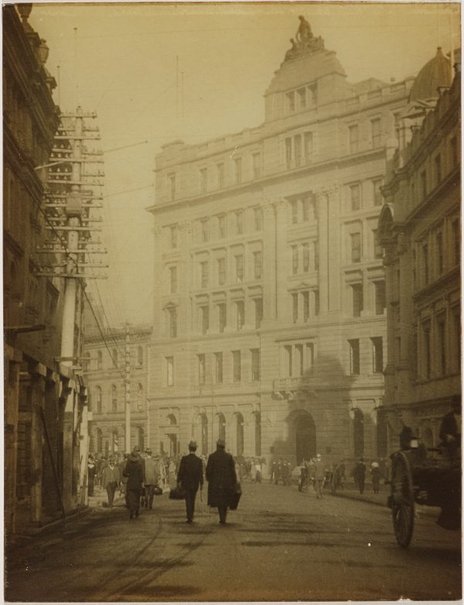 The celebrated Australian photographer Harold Cazneaux’s masterful command of the harsh Australian sunlight and unique adaptation of the aesthetic traditions of pictorialism lends his work an idiosyncratic theatricality. Cazneaux began his career working in commercial studios, following the lead of his parents who both worked in photographic studios in New Zealand. Cazneaux ascended to the position of ‘chief operator’ at the renowned portrait firm Freeman’s upon his relocation to Sydney in 1904. It was while working at Freeman’s that Cazneaux began to push against the formal strictures of commercial photography and experiment with the medium. Walking to and from work, Cazneaux captured fleeting moments of urban life, photographing street scenes and pedestrians. In these early photographs, Cazneaux used his immediate surrounds as a case study in the expressive principles of pictorialist aesthetics, exploiting the camera’s ability to evoke sensation as well as record reality.

This photograph of Spring Street in Sydney is one such case study. Here, the abrupt collision between the newly installed telegraph poles and the horse drawn cart becomes an historical, yet resonant, elegy to a time when the modern metropolis was still a somewhat burgeoning concept. The two silhouetted figures depicted from behind anchor and punctuate the scene, pulling the viewer into the urban environment, and demonstrate Cazneaux’s innate sensitivity to composition. Unlike the other street scenes that Cazneaux produced at this time, this photograph has been face mounted onto glass. A novel and, at that point, infrequently used technique (having been popular in the nineteenth century), this process lends both precision and the suggestion of depth or three-dimensionality to the scene. In the same way that he adopts compositional strategies to pull the viewer through the space of the image, Cazneaux seemingly uses the glass to direct and animate the gaze. Creating the illusion of depth, however subtly, Cazneaux reconditions, and intervenes upon, the act of looking at a photograph.

Purchased with funds provided by the Photography Collection Benefactors’ Program 2017