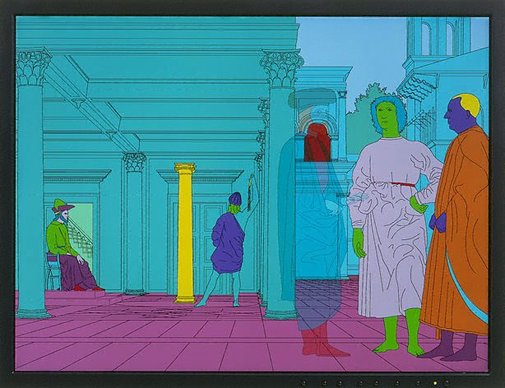 Michael Craig-Martin’s sculptures and installations focus on ordinary, mass-produced functional objects. One of his most infamous works, ‘An oak tree’ 1973, consists of a tumbler of water on a glass shelf.1 A text hangs next to the shelf explaining the nature of the conceptual denotation of this object as an oak tree. In this simple way Craig-Martin demonstrates the technique invented by Marcel Duchamp of nominating objects as art while presenting us with an insoluble conundrum: if an artist can assert that a found object is a sculpture, then he, or she, can assert that a glass of water is a tree. The text which is part of the work makes it clear that this is not like a tree or in some way associated with the growth of a tree; it simply is a tree.

During the 1970s Craig-Martin developed a unique style of drawing from life. Building up a repertoire of hundreds of common objects such as shoes, knives and forks, light bulbs, buckets and safety pins, he drew these in a simplified graphic form which he then painted using highly mechanical processes. For example, he produced a simple outline using tape as a mask, which was removed once the work was complete to reveal a line of the very first colour layer. He then painted more layers of saturated colour in flat, even paint with each layer defining one of the objects or fields. His intention has been to make the painting conceptual rather than personal or expressive, and yet he acknowledges that in the end the paintings are beautiful and they do reflect his own very precise aesthetic. In these compositions, everyday objects are placed next to one another, or layered one on top of the other, creating spatial ambiguities as each object is given an equal scale, for example a pin is the same size as a bucket or chair.

Since 2001 Craig-Martin has been making digital works assisted by the London-based design group AVCO, which developed the software for a computer-generated artwork based on Craig-Martin’s line drawing technique. ‘Deconstructing Piero’ runs a randomised program to create a time-based visual mapping of Piero della Francesca’s ‘The flagellation’ c1455 in which the composition and colour are constantly but slowly altering. The eight figures independently fade, disappear and eventually re-emerge. At the same time each of the six areas forming the landscape slowly changes through a range of 21 colours. The figures may all appear at once, or none may be visible for a considerable length of time. The program allows for unpredictable combinations which may never be repeated.

1. This work is in the collection of the National Gallery of Australia, Canberra