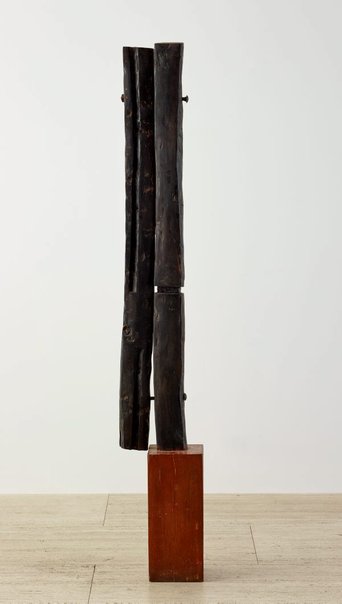 Kim Lim was a Singaporean-born sculptor and printmaker who studied at Saint Martin’s School of Art, London from 1954-1956 and later graduated from the Slade School of Art, London in 1960. This work, made soon after her graduation, is one of her early sculptures in wood that demonstrate an abstraction of form and a faithfulness to materials that resonates with the principles of art making found in the work of Romanian modernist, Constantin Brancusi.

Although Kim Lim was interested in minimalist ideas around the simplification of sculpture, to a set of basic geometric forms she introduced texture and rhythm to her sculptures via modular construction and markings made using paint and carving tools. The roughly carved sections, incisions and colour serve to break up the flat surfaces and solid forms, offering moments for meditation and reflection. Kim Lim’s interest in the tension between flat and broken surfaces, between stasis and movement, can be traced to her travels to architectural sites in India, China, Japan and Southeast Asia where she used photography to document roof structures, colonnades, sun lit facades and dark recesses.1.

In 1966, just a few years after making this sculpture, Kim Lim held her first solo show at London’s Axiom Gallery where she showed several painted steel and wood sculptures consistent with the rhythmic geometric forms of this work. Kim Lim continued to work in wood until 1979 when stone became her preferred material. Although she never returned to working with wood, sculptures from the later part of her life often revisit the earlier themes found in this sculpture.

Browse other works by Kim Lim