Empire (Remember when half the map was red?) 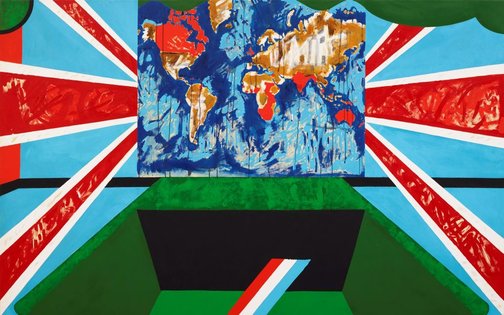 'Empire (Remember when half the map was red?)' 1969 was featured in Alan Oldfield's solo exhibition The great nostalgia show at Central Street Gallery, Sydney in February 1969. As the exhibition's title indicates, Oldfield addressed the present by surveying the past. It was thematically broken down into decades throughout the twentieth century up until the 1960s and he played with popular misconceptions regarding the lineage of style in modern art. Writing in a review in The Bulletin, artist-critic Elwyn Lynn commented that: 'The whole show is a gay and spirited reproof of those who think that they have summed up recent abstraction by saying it draws upon the 'twenties or 'thirties and those who don't see how styles preserve previous styles' [1]. Perhaps in response to debates surrounding internationalism and provincialism in Australian art during the late 1960s, Oldfield produced 'Empire (Remember when half the map was red?)’ for the 'forties' component of his 'Nostalgia show'. The colonial imagery executed in newly imported pop art and hard edge style from America could be read, outside of the display's context, as a statement on cultural imperialism and its shifting hegemonies following the Second World War.

Alan Oldfield
Empire (Remember when half the map was red?)

Browse other works by Alan Oldfield 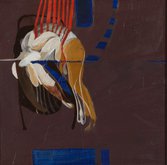 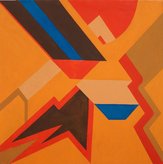 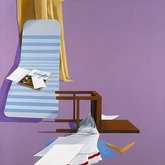