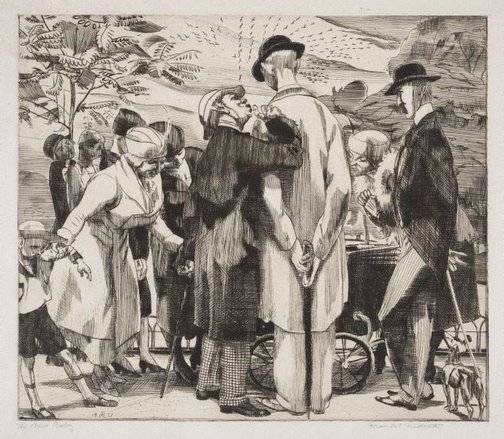 Frank Medworth studied art in London at the Camberwell School of Art from 1912, where he befriended David Jones (1895–1974)
and Weaver Hawkins, and followed his service in the First World War with further studies at the Westminster Technical Institute and Art School. Medworth exhibited widely and taught art in
London until 1938 when, with the encouragement of Hawkins, he emigrated to Australia to head East Sydney Technical College, from 1939–47. He also acted briefly as Director of the AGNSW in 1944–45.

Medworth was a versatile artist who made works in a restrained modern style using a variety of mediums. In Sydney he exhibited with numerous art societies and was an inspirational and influential teacher at the art school, having published three books on drawing and perspective that were especially popular amongst students in the 1940s and 50s. The Gallery has a fine
collection of Medworth’s prints including etchings, engravings and wood engravings that he made in England and brought with
him to Australia to exhibit and use in teaching.

“The new baby”, a gently satirical engraving that reveals the artist’s sense of humour, was made at a time when engraving in
metal was experiencing a small but significant revival in British art – one of the leading practitioners was Medworth’s friend from art school days, David Jones, who made engravings for private press books. Medworth’s engravings are more closely aligned with those of Edward Wadsworth (1889–1949), whose 1926 engraved illustrations for the book ‘Sailing ships and barges of the western Mediterranean and the Adriatic seas’ were a clear influence on Medworth, especially his own engravings of boats. The zinc plate for “The new baby” is in the Gallery’s collection.