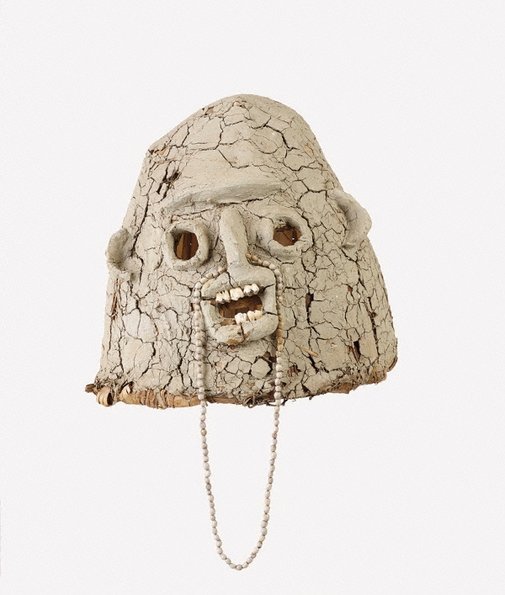 The fabled Asaro Mudmen are recognised throughout the world as a primary cultural symbol of the New Guinea highlands and Papua New Guinea. However, anthropologists have often questioned the authenticity of these masked figures, deriding them as manifestations of colonial administration and the tourist dollar. Images of mudmen have been used to promote fashion, cars, soft drinks, airlines and hotels, and have appeared on album covers and in comic strips.(1) In the 1950s and 60s mudmen were depicted by Australian artists who travelled to the highlands, including William Dobell and Margaret Olley, and also Sidney Nolan, who collected this in 1965.(2)

Divergent accounts of the mudmen's genesis led two anthropologists to study their origins, thereby uncovering a range of cultural, political and economic complexities.(3) They revealed that Ruipo Okoroko, the Big Man in Komunive Village in the Asaro Valley, apparently conceived the idea of the mudmen in response to a request from organisers of the 1957 Goroka Show for Ruipo to 'display an aspect of his peoples heritage in the form of a singsing (dance) group for the tribal finery contest'.

Ruipo's grandfather, Bukiro Pote, while living in another village, had learned the practice of 'bakime', in which the white sap of the 'meniha' tree was used to conceal the face of someone effecting payback. Returning to his village, Bukiro metamorphosed 'bakime' into the 'girituwai' – a snug-fitting mask fashioned out of bamboo, plant fibre and mud – to be worn during covert retaliation strikes against enemies.

At the 1957 Goroka Show approximately 200 Asaro warriors stormed the arena donning these new masks and were promptly awarded first prize in the tribal finery contest. In addition to wearing the finely constructed masks, known as 'holosa' (ghost) in Asaro, the men were coated in clay – a shared expression of mourning across the highlands – and wielded spears, feigning attack on the crowd, who ran away in fright.

Since that time the mudmen have become star attractions at the highlands shows, their fabled origins galvanising speculation. The most common story involves Komunive villagers who, banished from their homes after an attack, exacted revenge upon their enemy. After escaping into a nearby river, the Komunive emerged from the water with their bodies coated in white clay. Their enemies, mistaking them for the avenging ghosts of slain villagers, fled in fear, leaving the Komunive to take back their village and that of their foes. In another account, a small Asaro boy was afflicted by mites. Villagers covered him in grey mud and a mask was made to fit over his head to keep the flies away. The mud killed the mites and the boy recovered.(4)

Regardless of their origins, the Asaro Mudmen have brought fame and fortune to Ruipo Okoroko and his clan and demonstrations of mask construction and decoration are given at Komunive to this day.(5) Nowadays, 'holosa' masks are moulded from solid clay and often decorated with commercial logos, and the mudmen are still routinely called upon to perform for visiting royalty and foreign dignitaries.(6)

(2) Cynthia Nolan's book 'Paradise: and yet', Macmillan, London, 1971, was the result of her travels with her husband Sidney Nolan through the territories of Papua and New Guinea in 1965.

(4) Thank you to Helen and Paul Dennett for bringing to my attention this alternative story narrated by Trevor Freestone in 'Teaching in Papua New Guinea', Xlibris Corporation, Bloomington, Indiana, 2011.

(5) This fame has not been without consequence. Neighbouring groups have legally challenged Ruipo's claim to ownership of the creation of the masks and their accompanying performance, and over the decades other manifestations of the mudmen have appeared in surrounding areas.

(6) In 1974, just prior to independence, the Asaro Mudmen performed for Queen Elizabeth II at the Goroka Showground. In March 2008 Australia's prime minister Kevin Rudd was farewelled on the tarmac at Goroka Airport by a group of mudmen, and in May 2013 prime minister Julia Gillard was greeted by mudmen at Parliament House in Port Moresby.

A mud mask from Goroka

© Dano people, under the endorsement of the Pacific Islands Museums Association's (PIMA) Code of Ethics