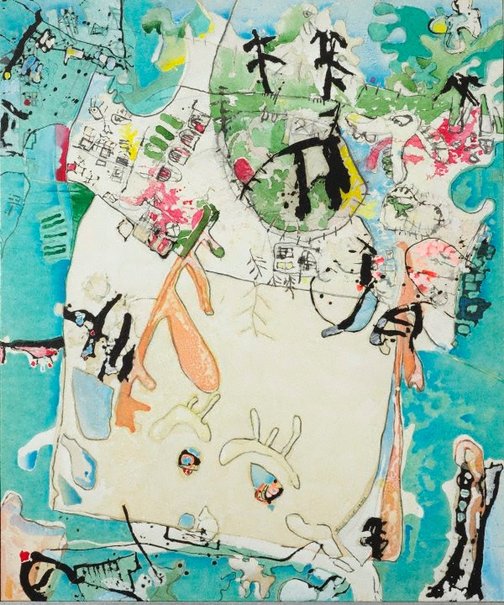 Michelle Collocott has exhibited widely since her first exhibition held at Gallery A in Melbourne in 1967, when she was then known as Martin Collocott.

Born in Sydney in 1945, Collocott grew up at Warragamba where her father was employed as a diver during construction of the new dam. A deep respect for nature and an abiding relationship with her surrounding landscape – whether at Oberon, west of the Blue Mountains, or in London, where the artist has frequently visited – has suffused the artist's practice throughout the past forty years.

Working with various materials, Collocott gradually builds up layers of textured surfaces and skeins of colour with tissue paper, glue and diluted pigments, infusing her canvases with a delicate sense of space, light and climate. From the 1960s onwards, she has also utilised topographical maps and aerial photographs as aids to construct her works, stating: "I have always been interested in the change which position gives you in terms of elevation. So you still get that aerial map … as a mechanism to then get down and try to get the essence of what the place offers rather than just the remoteness of it."

In 1994, Collocott spent several months in London and was captivated by the parks surrounding Hampstead Heath, in particular Golders Green Park, which consists of an expanse of grass and a formal flower garden with a duck pond. The integration of people and place inspired 'A lyrical view of Golders Green, London' (the final work in the series and largest of the group), which the artist commented: "… was the interaction of these different components which make up the whole: animals, landscape, trees, colour. Of course, we went there in Winter, so we saw snow, we saw the whole park frozen and icy … That's where those fence things came from. There are photographs about those fences, which end up coming through these paintings later on. They were just things which allowed me to explore this sense of visual rhythm."