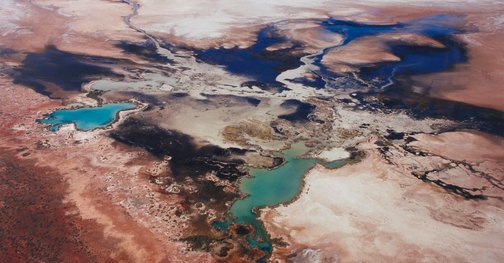 Richard Woldendorp was born in Utrecht, Holland and migrated to Western Australia in 1951 after three years in Indonesia. He began to photograph in 1955 and has worked as a freelance photographer since 1961. Self taught, he developed a specific interest in aerial photography as he felt this was the best way to capture the vastness of the (West) Australian landscape. He has published several books of his photography and contributed to many others.

Woldendorp has a special interest in salt lakes most of which occurred naturally when inland oceans dried up, however human activity has exacerbated the rise of salts to the surface. Lake Macleod, a huge 225,000 hectare coastal salt lake near Carnavon, is 110km long and 40km wide.

Woldendorp has said ‘the element of abstraction that’s in my work is only acceptable because painters first taught us how to appreciate sheer abstract qualities.’ 1

Browse other works by Richard Woldendorp