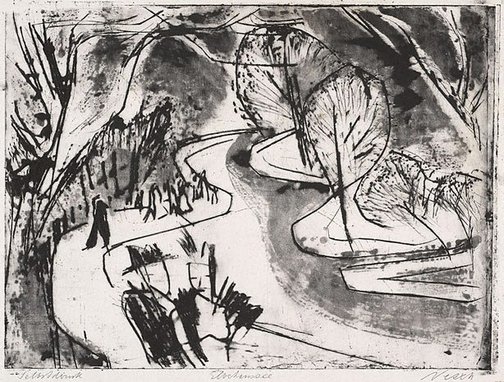 Nesch studied at the Kunst-und-Gewerbeschule in Stuttgart between 1908 and 1912. In 1913 he enrolled at Kunstakademie in Dresden but he was sent to the front before finishing his studies. Nonetheless, during his time in Dresden he came into contact with works by members of Die Brücke, being especially influenced by Kirchner.

Around 1922 Nesch took up printmaking and made the first of many visits to Hamburg. He also visited Kirchner in Davos in 1924, after which time his prints became appreciably more expressive and unconventional. He settled in Hamburg in1929 where he created many of his remarkably original prints – striking views of the city and its bridges in a bold expressionist style. The subject of this print, ‘Elbchaussee’, is a grand 19th-century boulevard in Hamburg, acclaimed as one of the finest streets in Germany. Lined with elegant villas and parks, it stretches for 10km along the banks of the River Elbe.

In 1933 Nesch emigrated to Norway after the Nazis rejected his works from an exhibition – the choice of country being determined by his admiration for Edvard Munch.

Browse other works by Rolf Nesch