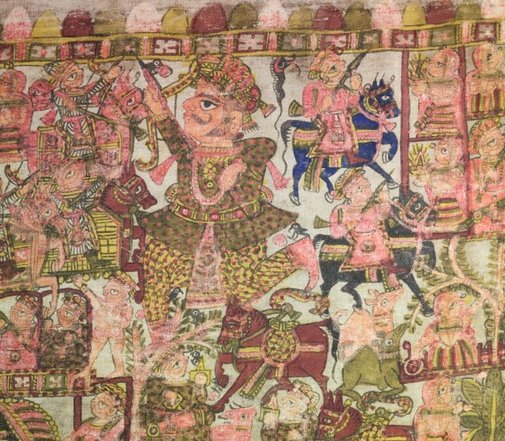 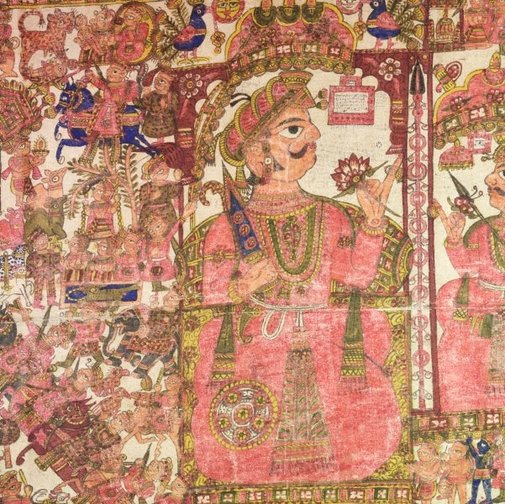 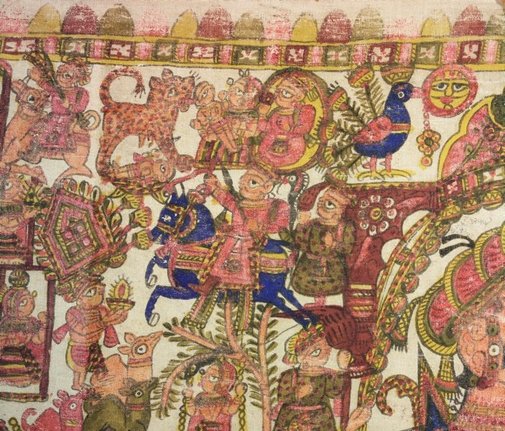 This visually rich and densely illustrated cloth panel ('phad') is often regarded as a narrative textile, however it functions more properly as a portable shrine to the deified hero Pabuji, the central and iconic figure of this 'phad'. The folk hero Pabuji is depicted in profile and is seated in his royal court in the manner of a Mughal king. He is attended by four companions who are depicted as his courtiers. These figures form the central and dominant motif of the scroll, around which the various episodes of the epic saga of Pabuji and his exploits are depicted.

The 'phad' is a compositionally complex painting, having a non-linear schema within which the various characters of the epic often resist definitive identification. However, despite the complexity of the pictorial scheme, the painting still conforms to a convention of colour, iconography and format. These cloths are painted by members of the Joshi lineage of the Chipa (textile block printers) caste and are still made in accordance with traditional methods of painting: the pictorial scheme being first traced out with the aid of a cartoon, the colours applied from lightest to darkest, the black outlines being added last.

These paintings are usually commissioned by itinerant storytellers-come-priests ('bhopa'), who are the officiators ('pujari') of the rituals and legends surrounding the worship of Pabuji. Amongst the tribes and clans who worship Pabuji, the recitation of this legend constitutes something of a liturgy, and its performance amounts to a religious observance, albeit one which is characteristically lively, informal and entertaining.

Contemporary phad paintings are still made and sold, some as souvenirs to an increasing number of tourists to Rajasthan. However, the status of the 'phad' as an object of sanctity and reverence, and the continuance of its associated ritual, ensures traditional patronage. Traditionally old and worn 'phad' are immersed in the Pushkar lake in a manner befitting the disposal of sacred images and objects. Given this practice, this early phad is a significant example of this painted cloth, and an important addition to the Gallery's collection of Indian painting.

Jackie Menzies, TAASA Review, 'In the Public Domain: An Epic Painting of the Life and Miracles of Pabuji', pg. 17, Sydney, Jun 2015, 27 (colour illus.). Illustration is a detail only