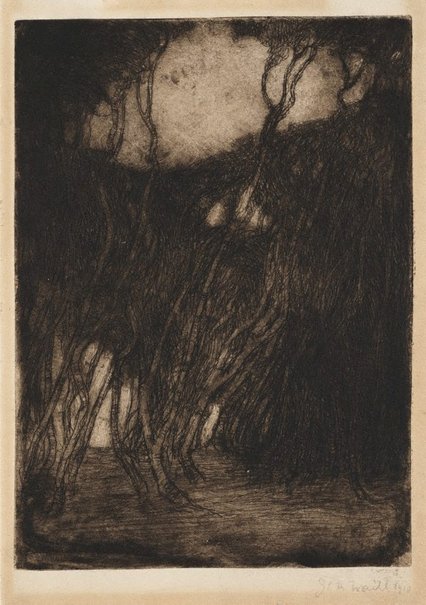 Jessie Traill was born in Melbourne, the youngest daughter of a wealthy banker with an interest in the arts, and his second wife. There were family friendships with the Boyds and a'Becketts; she also befriended Tom Roberts as a girl and they remained life-long friends. Jessie and her sisters travelled to Europe with their father on his business trips (he died during such a visit to Rome in 1900). She had part of her schooling in Switzerland where she learned to speak French fluently; she also had French cousins. Traill studied at the National Gallery School, Melbourne 1901-06 and etching with John Mather in 1903. She left for Europe in 1906 and studied in Paris at Colarossi's, La Grande Chaumière and in London with Frank Brangwyn 1907-09. Brangwyn and his etchings exerted a powerful influence on her. She exhibited etchings at the Royal Academy and the Old Salon, Paris in 1908 and upon her return to Australia in 1909 held her first solo exhibition in Melbourne, which established her reputation here. In 1914 she won a prestigious gold medal at the Panama-Pacific International Exhibition in San Francisco for her etching 'Beautiful victims'. During World War I she was a member of the British Voluntary Aid Detachment active in France.

On her return to Australia she joined the newly formed Australian Painter-Etchers Society and took part in their exhibitions. Traill travelled overseas frequently and in Australia, taking a particular interest in Central Australia. She concentrated on landscape and industrial subjects, which culminated in her best-known series concerned with the building of the Sydney Harbour Bridge produced between 1927-31, all of which are in the Gallery's collection.