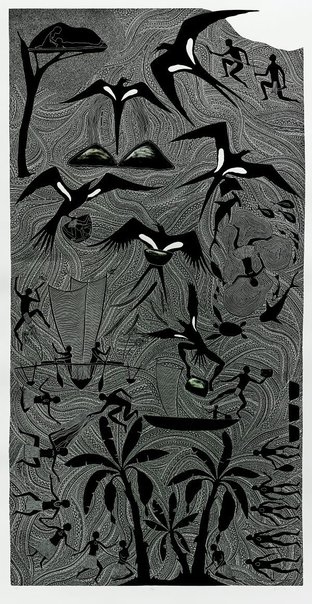 Daniel O’Shane is one of the younger artists working with printmaking. He studied through Cairns TAFE and currently works through Canopy Arts in Cairns. While he only began studying in 2009 he has already received wide acclaim, recently being awarded the Silk Cut Award Grand Prize for his print "Aib ene zogo ni pat (Aib & the sacred waterhole)". He was also a finalist in the 2015 Telstra National Aboriginal and Torres Strait Islander Art Award, with his work, ‘Meuram and Zogo ni Pat’ 2015. The works themselves become a form of storytelling capturing the main protagonists and the events with which they are connected.
O’Shane is an extremely technical printmaker, his proficient carving and animated illustrations reflecting the grand details of the narratives he is documenting. The dramatic scale of his prints allow this complexity, with shifts in the background patterning creating a sense of movement and dynamism – that the actions being referenced as still in play today.