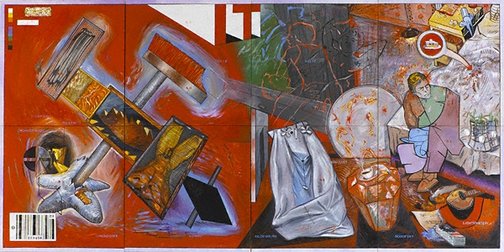 Juan Davila's paintings and collage works from the late 1970s and early 1980s are amongst the most transgressive art works created in Australia. Davila's incorporation of pornographic imagery, political references and art historical citations created a volatile mix of confrontational images and text which most famously lead to the censorship of 'Stupid as a Painter' by the AGNSW, the 'arrest' of the painting by the vice squad and the subsequent intervention of the NSW premier Neville Wran in order to return the work to public exhibition.

Davila's large scale canvases from this period embody the interconnected strands of pop art imagery and post-modern appropriation, or citation, that were so influential during this decade in Australian art practice. 'Neo-Pop' was originally two separate paintings entitled 'Neo-Pop', 1983, (the right two panels) and 'Post Modernism', 1984, (the left two panels). Davila's use of wide-ranging visual and social references, including the work of other artists, feeds into his subsequent reworking of many of his own canvases from this period. In 1985 Davila combined 'Neo-Pop' and 'Post-Modernism' in the present work which kept the title 'Neo-Pop'.

While retaining their original form Davila has substantially reworked the details when he turned them into one painting. In 'Post-Modernism', he kept the Swastika-like form but changing the cursive text citing artist's names into a more typographic blocky text and replacing Dokoupil who was named in the earlier version, with Rosenquist and references to Lichtenstein. Moholy-Nagy is also cited in the reworked panels. The right two panels are closer to their original form with again the style of text changed and an ejaculating penis replaced with a slice of cake, as well as other elements introduced. Running across the two canvases in the upper centre is the large blocky text IT which recalls the work of New Zealand artist Colin McCahon.

Davila has refined his earlier two canvases to create this merger of neo-pop and post-modernity. The attribution of prices and values to art works and the swastika composed of citations of other artist's practices indicates the ideology and control exercised by an 'international' art market, with all the centre/periphery, inclusion/exclusion, influence/travesty, issues that this raises. Davila's painting both echoes and erodes the values assigned to art works and artists by the institution and the art market, through his emulation of the large museum scale of contemporary neo-expressionist work and the use of a commercialized imagery which points to its own circulation in the art market, an economy of desire which slips into a sexual economy in Davila's inclusion of (male) couple having sex and a beefcake torso.

Browse other works by Juan Davila