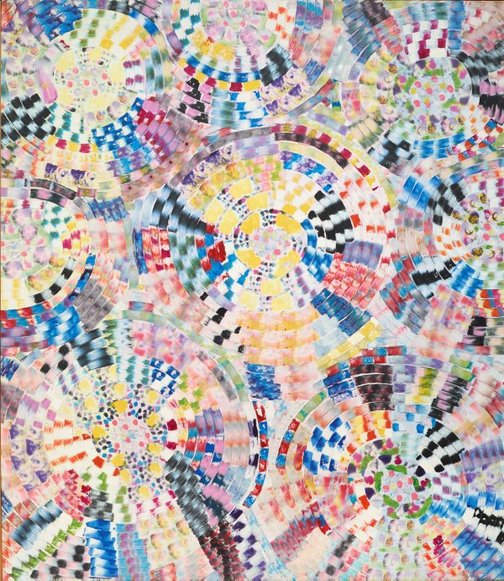 Richard Larter first came to prominence in Australia in the mid 1960s, following his arrival from London with his wife and muse, artist Pat Larter. His sexually explicit and sometimes confronting images, derived from pop culture and pornography, challenged Australian audiences of the period with their forceful anti-authoritarian stance and unusual experimental techniques. Early works were executed using a medical syringe filled with paint which was then squeezed in fine lines across the surface.

'Epicycloidal sliding shift (SG2)' 1983 is from a series produded in the early 1980s, in which Larter focused on ideas gleaned through his reading of Ptolemaic astronomy. With its repeated circular motif which appears to rotate like giant cogs within a glass prism, Larter's rainbow palette and patterned surface – with its small mosaic-like dabs of paint created using a small sponge roller – is reminiscent of the work of Grace Cossington Smith, whose work he admired. Larter also acknowledges the geometric abstractions of French artists Sonia and Robert Delaunay and the colour theories of Eugene Chevreul. The precisely arranged mosaic of clear, brilliant colour pulsates with energy.

Donated through the Australian Government's Cultural Gifts Program by Joanna Mendelssohn, in memory of Richard and Pat Larter 2015