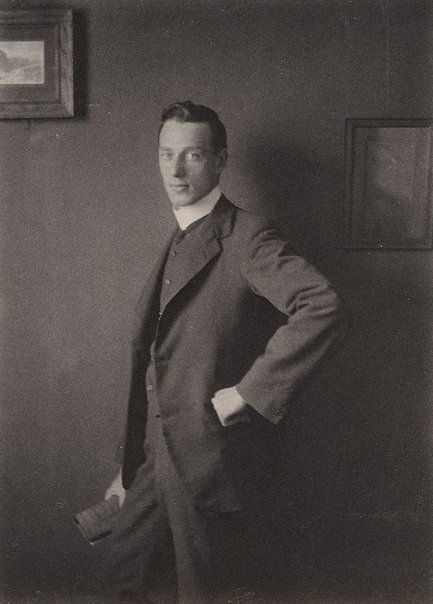 This unidentified portrait is a dignified representation of the subject and playful meditation on the photographic portrait practice. The image is a platinum print or ‘platinotype’, named after the company which manufactured the paper upon which it was printed. Platinotypes such as this image would have been washed in potassium oxide, during the resolution process so as to draw out the platinum from the paper. Platinum was superior to the gelatin silver process because it yielded a broader range of grey tones and was less susceptible to aging 1. The three-piece suit, stiff white collar and simple black tie of the subject align him with the pared-down sobriety and respectability emblematic of the professional upper-middle class. This pose has been chosen to communicate an industriousness and confidence about the subject’s character. He looks directly at the camera, with a bent knee, hand on his hip and rolled up periodical. These choices in pose and photographic materials give a seriousness and exclusivity to the portrait. By contrast, the choice of backdrop lends a slightly ironic tone. The landscape and the barely discernible bust of a woman (?), which sneak into the parameters of the view comment on the necessarily selective nature of portrait making.
Harold Cazneaux was born in Wellington, New Zealand in 1878. His parents, Pierce Mott Cazneau and Emma Florence (née Bentley) worked in commercial studios in New Zealand before returning to settle permanently in Adelaide during the early 1890s. At the age of 18 Cazneaux went to work alongside his father at Hammer & Co studio as a retoucher. He moved to Sydney in 1904 to join the larger portrait firm, Freeman’s quickly ascending to the position of ‘chief operator’ (as camera portraitists were known). Studio work was highly formulaic, with little scope for creativity. Cazneaux used his time walking to and from work to experiment with pictorialist aesthetics 2. The Photographic Society of New South Wales organised an exhibition of Cazneaux’s photographs in 1909, the first such solo exhibition of its kind in Australia. In 1916 he and fellow pictorialist photographer, Cecil Bostock founded the Sydney Camera Circle. The group was particularly interested in the how pictorialism could be adapted to and extended within an Australian context. The mechanised, standardised and frenetic pace of Freeman’s increasingly took its toll on Cazneaux’s creativity and health, and he resigned in 1917. He moved with his wife and daughters to the Sydney suburb of Roseville, and in 1920 he was employed as the official photographer for The Home magazine. This new position let him work in a varied indoor and outdoor environments. In 1938 Cazneaux was awarded an Honorary Fellow of the Royal Photographic Society of London. He continued to work until his death in 1953.
1. Warner Marien M 2006, ‘Photography: A Cultural History 2nd ed.’ Laurence King Publishing, London p 515
2. Newton G 1988, ‘Shades of Light: Photography and Australia 1839-1988’, Australian National Gallery, Canberra p 85