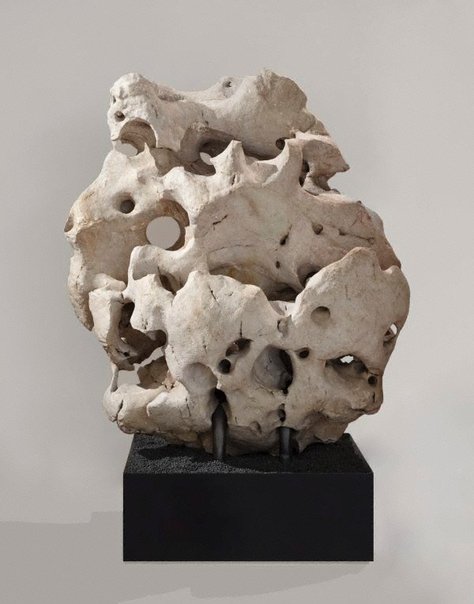 In China the appreciation of Taihu rocks has a long history. In the Chinese garden, Taihu rocks play the role of sculpture in Western gardens. Taihu rocks are essential elements of Chinese painting and literature. The Taihu rock takes its name from Lake Tai, about one hundred and twenty miles from Nanjing by water transport, a place famed for its rocks for about a thousand years. The typical Taihu rocks are hard and glossy, with strange configurations of hollow 'eyes' and twisting peaks. They have a net of raised patterns all over, their surfaces covered with small cavities, worn by the action of wind and waves. The rocks may be produced in the waters of the lake. Du Wan, a rock connoisseur of the twelfth century wrote in 'Yunlin shipu' ('Stone catalogue of the cloudy forest') about how people collected the Taihu rock in his time: "Those who harvest these stones dive for them, mallet and chisel in hand. A very toilsome business. When a fine specimen has been cut free, it is bound with huge ropes and then winched up into a large boat." But the same type of rocks may also be found underground.

The Chinese interest in rocks has been closely associated with the cosmological idea and the thought of immortality. A rock with its eroded surface and twisted peaks is a symbol of the cosmic mountain that functions as an intermediary realm between heaven and this world. It serves as a symbolic link between man and the realm of the spirits.

From its interior rise quiet whispers,
Is it the womb of winds?
Sharp swords show in its angular edges,
Their ringing resonance clearer than jasper chimes.
Its great shape seems to move,
Its massive forces seem on the brink of collapse.
Rare forms responding to its hidden ghosts,
A spirit in consort with pent up wind and thunder
…

These powerful metaphors by famous poet Bai Juyi’s (722-846) on Taihu rock convey the complex imagery of these naturally formed ‘strange rocks’. They reflect a long tradition of Chinese appreciation of rocks, started as early as Han dynasty (206BCE -220) until current time. For lovers of these spirit rocks, each individual rock, large or small, is seen to be worked by divine hands, and represents the universe in miniature. The configurations of rocks are viewed as the results of the energy (qi) participating in creative process, representing the eternal process of change.

Rocks have been given many symbolic meanings, such as immortality, faithfulness, steadiness, endurance and being modest. The Sage [Confucius] said “the humane man loves mountains, and the love of stones has the same meaning”. Compassion for one’s fellow people is as sure an axis of society as the rock-mountain is of the landscape.

Taihu rock is one of the highly valued rocks among stone connoisseurs in China since 7th century. They are referred to rocks discovered at the bottom of Lake Tai in Jiangsu Province of southern China. The large Taihu rocks are generally used for gardens, but small ones are occasionally used in studios. Because of the high demands, they became very rare, so similar rocks found in other parts of China are also loosely called Tai Hu rocks.