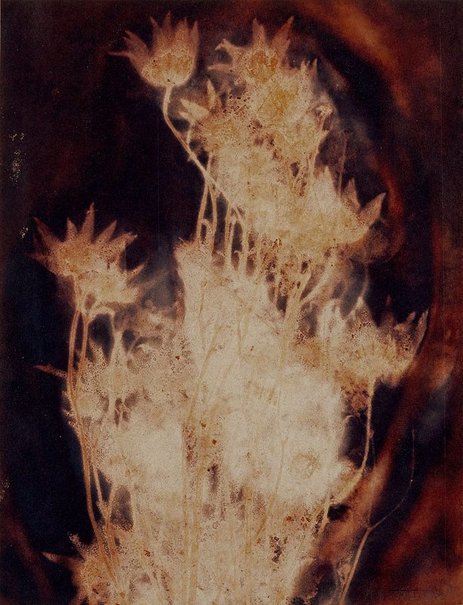 Juliana Swatko has always been interested in unusual photographic processes and, as she says, how ‘the process itself possesses the ability to effect changes to the image through its reflective nature, allowing us to view things in a new light’.1 This interest in experimentation was fuelled by her desire to fuse her interests in drawing and photography. Combining vintage techniques with modern materials she explores the inherent possibilities of colour photographic processes.

Swatko’s earliest thermal images were made using a form of photocopying machine available in the 1970s which operated on conducted heat. The image ‘Untitled’ has been created by such a process – made from direct contact between plants and print surface, much like a photogram, but using heat and pressure instead of light. Colour is derived directly from the plant’s natural dyes and/or from the 3M thermal dye sheets onto which the plants are pressed. The plant’s water content generously conducts heat in this thermal process, allowing its delicate life to be transcribed to paper in light and colour. Working mostly with details of the natural world, Swatko obliges the viewer to reconsider these ordinarily low-key subjects, amplifying their textural and structural details and imbuing them with luxurious colour. The works possess a sense of antiquity in colour and tone and recall 19th-century plant specimens, such as the delicate cyanotypes of Anna Atkins and William Henry Fox Talbot’s photogenic drawings. For Swatko, however, her interest ‘lies not in the actuality of the objects rendered but in similarities they bear to metaphors they might be for other ideas or experiences’.2

Browse other works by Juliana Swatko